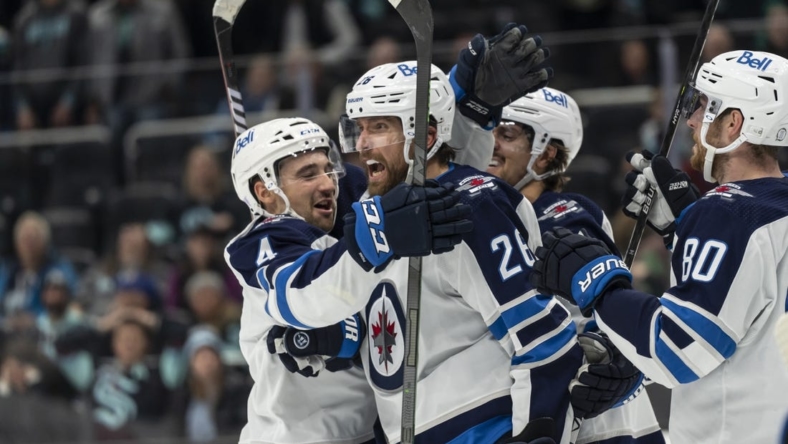 Winnipeg is 7-1-1 in its past nine following a come-from-behind 3-2 overtime win against the Seattle Kraken on Sunday.

The Jets have eased into November with only five games in the first 16 days, but that’s about to change. Beginning with Anaheim, Winnipeg will play 20 games in 37 days.

“Things start amping up pretty quickly after these couple days off before our next one,” defenseman Nate Schmidt said earlier this week. “When you’re traveling a bunch like we will be doing, you’re going to look back and be happy you had days like today.”

The Jets have taken advantage of their recent schedule to stockpile points.

Against the Kraken, Blake Wheeler scored his 300th NHL goal with 5.2 seconds remaining in the third period to force overtime. Then Mark Scheifele converted on a 2-on-1 with Josh Morrissey 54 seconds into extra time for the win.

The overtime assist continued an impressive offensive start for Morrissey, a 27-year-old defenseman. He leads the Jets with 15 points and his 14 assists are among the most for NHL blueliners.

“His work ethic is exceptional,” Jets coach Rick Bowness said. “He’s dominant with the puck, he’s an elite skater, elite hockey IQ. He’s got the green light to use both of those. He’s very reliable defensively, he plays against the best players because of his hockey IQ and his skating mobility.”

Winnipeg did get some bad news during its down time. Forward Mason Appleton, who went into the boards awkwardly versus the Kraken, will be out 8-12 weeks after undergoing wrist surgery.

The Ducks snapped a three-game losing streak with a 3-2 overtime win against the Detroit Red Wings on Tuesday.

Ryan Strome scored with 50 seconds left in overtime, and Mason McTavish and John Klingberg added goals. John Gibson made 31 saves for Anaheim, which remains the only NHL team without a regulation win.

“We worked hard all night and I think we were the better team,” Strome said. “Obviously it’s been tough for us lately, but this one feels good and hopefully we can get on a roll.”

Anaheim, last in the Pacific Division, now embarks on a three-game road trip. They are 2-6-1 away from home but look to carry some momentum from Tuesday with them.

“In every aspect of our game, I just thought we were solid,” Ducks coach Dallas Eakins said of Tuesday’s effort. “It wasn’t that we were great. We weren’t bad at all. It was just a really solid game, and it was certainly a building block.”

One area of concern remains the penalty kill. After allowing an early power-play goal to Detroit, the Ducks have allowed 21 on the season, tied with Vancouver for most in the NHL entering Wednesday.

A bright spot has been the play of McTavish, who has eight points (two goals, six assists) in 16 games, putting him in the top five among NHL rookies in scoring.

Ducks forward Sam Carrick made his season debut against Detroit after recovering from offseason hip surgery. He had four hits in 4:38.