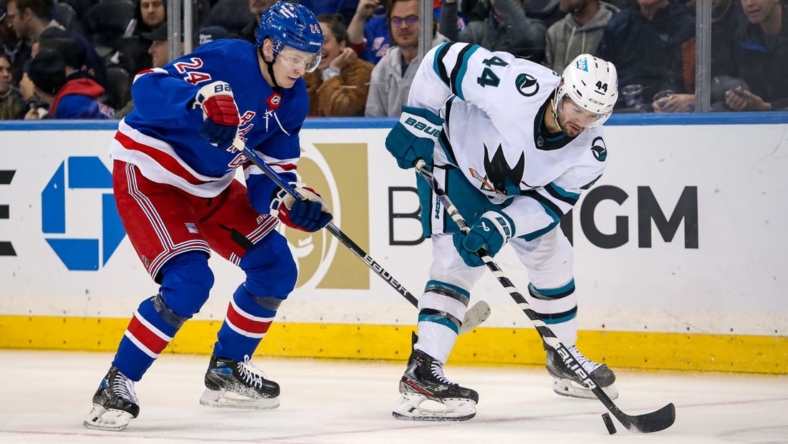 Karlsson had four more points (one goal, three assists) on Thursday in a 7-4 loss to the visiting Detroit Red Wings, moving him into a tie for second in the NHL with 28 points (11 goals, 17 assists).

Karlsson has nine multi-point games this season and leads the NHL in even-strength goals (10) and points (23).

Since the NHL began keeping offensive stats for defensemen in the 1975-76 season, Karlsson is tied for the sixth-most points through 19 games by a defenseman in league history.

“He’s feeling himself,” San Jose forward Kevin Labanc said of Karlsson. “He’s got that skill where the puck just doesn’t seem to leave his stick.”

The Rangers are benefiting from exceptional offensive play from one of their defensemen as well.

Adam Fox assisted on Vincent Trocheck’s game-tying goal with 1:56 left in the third period at the Seattle Kraken on Thursday night before the Rangers lost 3-2 in overtime.

Fox’s contributions have been a welcome addition, but the Rangers are more concerned with the lack of energy they showed in the opener of the four-game road trip against Seattle.

They were especially lackadaisical in the second period, getting outshot 16-5 and getting called for too many men on the ice for the second time in the past three games.

“You end up chasing pucks if you’re not doing the things that allow you to advance pucks and forecheck and play north,” New York forward Chris Kreider said. “You’re going to look tired if you’re constantly turning pucks over and playing deep.”

Shesterkin faced San Jose on Oct. 20 in New York and saved 24 of 27 shots, but the Rangers lost 3-2 on an overtime goal by Karlsson.

Shesterkin isn’t off to as strong a start as last season, but he was a bright spot against Seattle, making 29 saves and helping New York escape with a point.

“He made some great saves and key saves, especially in that second period when it was 1-1,” Rangers head coach Gerard Gallant said. “He kept us in the game and then we found a way to get a point at the end, but it’s not good enough. We’re better than that.”

“We’re a pretty good road team, and we’ve played some pretty good hockey at home, but we’re not getting the results that we need,” Gallant said.