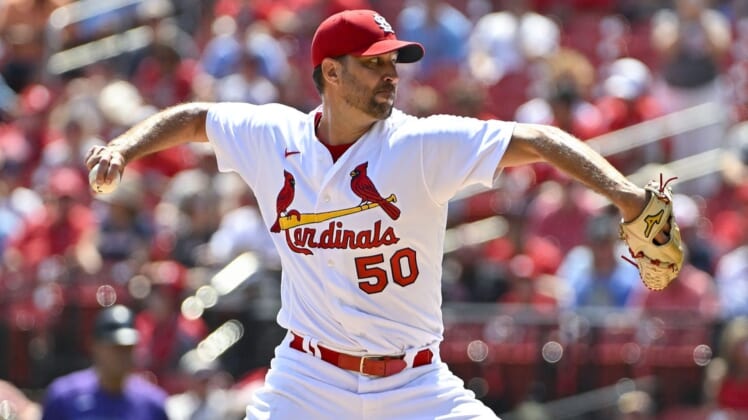 Just shy of his 41st birthday, Adam Wainwright continues to excel for the St. Louis Cardinals.

He’s also been pretty solid against the Chicago Cubs, as of late.

Set to make his 450th appearance, Wainwright aims to help the surging Cardinals extend their season-high winning streak to nine games in the opener of Tuesday’s doubleheader against the host Cubs.

“Go with what you got,” Wainwright said.

Things have gone quite well for Wainwright against the Cubs in recent seasons. Since September 2020, the right-hander is 2-0 with a 1.27 ERA in five starts versus Chicago. He’s yielded two runs over 14 innings in two 2022 outings, including seven scoreless on Aug. 2.

Wainwright’s teammate and fellow ageless-wonder Albert Pujols clubbed a grand slam in Thursday’s blowout against the Rockies. The 42-year-old Pujols’ 693rd home run of his career was the difference in Monday’s 1-0 victory — the Cardinals’ 17th win in 20 games and fourth straight over Chicago.

“We’re just kind of like living in his shadow right now,” Wainwright said of Pujols. “Which is where we should be. He’s incredible.”

It’s likely Chicago’s Javier Assad (0-0, 0.00 ERA), slated to make his major league debut in Game 1 after posting a 2.66 ERA in 23 games between Double-A and Triple-A this season, will have to deal with Pujols.

The future Hall of Famer homered in his only at-bat against the Cubs’ scheduled starter for Game 2, Adrian Sampson (1-3, 3.51), who allowed four hits and two walks while tying a season high with six strikeouts over 5 2/3 innings of Thursday’s 3-2 victory at Baltimore.

Perhaps the highlight of the right-hander’s outing came in the fifth inning, when he fielded Jorge Mateo’s bunt and glove-flipped the ball to catcher Willson Contreras to cut down Austin Hays at the plate. It was a play that ultimately helped him to his first 2022 win in 12 total appearances (10 starts).

“Wins will come no matter what,” Sampson said. “My job is to keep our guys in the game.”

Sampson’s first start of 2022 came at St. Louis, where he allowed two runs, four hits, two walks and struck out five over five innings of Chicago’s 5-3 loss on June 25.

Chicago All-Star Ian Happ is 1-for-12 with seven strikeouts in his last three games, but is batting .333 (9-for-27) with four homers and two doubles versus Wainwright.

Meanwhile, Contreras, Rafael Ortega and Christopher Morel are a combined 10-for-20 against St. Louis’ Jake Woodford (2-0, 2.66), who is scheduled to make his first start following 13 relief appearances this season, in the nightcap.

The right-hander is 1-1 with a 4.32 ERA in eight appearances (three starts) against the Cubs, who have dropped two in a row after winning five straight.