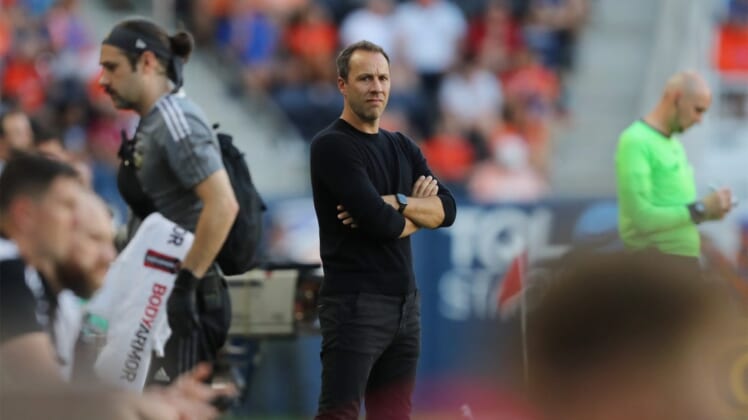 Los Angeles FC will look to maintain their hold atop the Western Conference and Supporters’ Shield standings when they host a New York Red Bulls side that is the best in MLS on the road.

LAFC (9-3-3, 30 points) entered the weekend with an MLS-best point total, but with seven teams within five points of the leaders in the chase for the Shield and best regular season record.

Vela played the second half in two of those matches — scoring once — and missed the other. And while the 33-year-old still leads LAFC with six goals, first-year head coach Steve Cherundolo’s ability to earn results without him as a starter is somewhere previous boss Bob Bradley struggled.

That said, Cherundolo is wary of a high-pressing New York Red Bulls side that has earned an MLS-best 16 points away.

“I think if you look at the way they play, it’s quite explainable why they’ve been better away from home,” Cherundolo said. “At home you have the burden of maybe making the game, and away from home you do not, which plays right into their game model.”

Cherundolo pointed to LAFC’s 2-2 home draw against the Philadelphia Union — another pressing team — as an example of what to expect from the Red Bulls (7-4-5, 26 points).

But RBNY face a cross-country trip four days after a 3-0 win over New York City FC in the U.S. Open Cup quarterfinals.

Head coach Gerhard Struber was able to rest leading scorer Lewis Morgan the final 17 minutes off that contest after he scored his ninth goal in all competitions.

Morgan’s seven goals in MLS play mark his highest total in any league since bagging 14 for St. Mirren in the Scottish second tier in the 2017-18 campaign.

“Obviously loads of it comes from teammates and what we’ve been able to do as a group has been a big help for me,” Morgan said this week. “I’m very big on putting demands on myself. At the start of the year I wanted double figures. Once I get there I’ll set a new target for myself and keep reaching.”