Red Bulls in Texas for first-ever clash with Austin FC 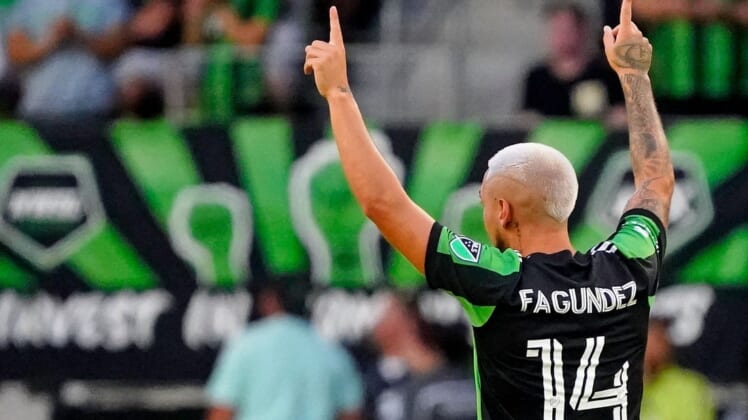 Austin FC look to continue their run of unbeaten play Sunday when they face the visiting New York Red Bulls for the first time.

Austin FC (12-4-5, 41 points) are coming off a 1-1 draw in Dallas on July 16 that extended their streak without a loss to a club-record seven games (5-0-2) since coming back from the international break in mid-June.

Diego Fagundez had Austin’s tally in the draw with the Texas rivals to the north, a result that allowed the second-year team to capture the Copa Tejas, the supporters’ award given to the state’s best team over a season.

“I’m happy for the fans that they have the bragging rights for this year,” Austin captain Alexander Ring said. “But in the end, we have bigger things that we want to accomplish with this team. This is a good first step, but we’re not done yet.”

Austin forward Sebastian Driussi leads the team and is tied for third in MLS with 11 goals.

Sunday’s match will be Austin’s final regular-season clash with an Eastern Conference opponent. Austin has won six of its seven matches against teams from the East this year, drawing the other. Eight of Austin’s remaining 13 matches are at home.

Coach Josh Wolff is expected to be back on the Austin sidelines after missing the Dallas match because of health and safety protocol.

The Red Bulls (9-6-6, 33 points) have been one of the league’s top road teams at 6-3-2. But New York has not won in Texas since 2014, losing three times and drawing three matches in competitions versus Dallas and Houston.

New York heads to the capital of Texas after a 1-0 loss at home to New York City FC last Sunday. It was the sixth time this year that the Red Bulls have been shut out.

“It’s not the time for mourning or crying time — it’s our chance to produce in a big atmosphere in Austin against the top team in the league,” Red Bulls coach Gerhard Struber said Friday. “We have to find the set that would help us to bring points home. This is the big goal; this is in the end our motivation.”

The Red Bulls are one of the league’s best defensive squads, surrendering just 22 goals (tied for third fewest in MLS). Lewis Morgan leads the Red Bulls with nine goals.