Red Bulls have their playoff berth; NYCFC working on it 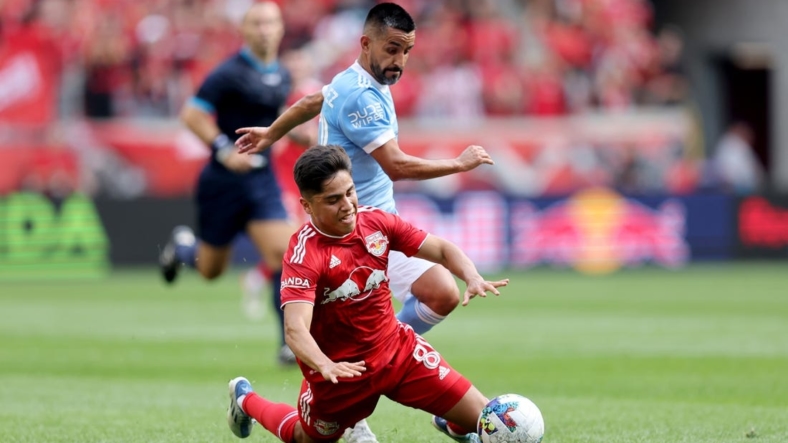 The New York Red Bulls are in the postseason for the 13th straight year, and next up on their agenda is securing third place in the Eastern Conference. To do that, they’ll need to defeat New York City Football Club, currently sitting in fourth place.

Meanwhile NYCFC will be seeking another win over the Red Bulls after winning their previous meeting when the Hudson River Derby resumes Saturday afternoon at Yankee Stadium.

The Red Bulls (14-9-8, 50 points) hold a four-point lead over NYCFC (13-11-7, 46 points) and can clinch third with a win Saturday. The Red Bulls all but secured the playoff berth with last week’s 2-1 win over the visiting New England Revolution when Lewis Morgan scored the tiebreaking goal on a penalty kick in the 78th minute. They officially made the playoffs on Wednesday based on results from other games.

“For them to come here earlier this year and win at our place in the regular season did not feel too good,” Red Bulls captain Aaron Long said. “So, I’m definitely looking forward to that game because again, looking at the playoff picture and where we can set ourselves up in the top four, it is a really big game.”

Since Valentin Castellanos scored in the 69th minute of that July 17 game, NYCFC has struggled. Castellanos appeared in his final game July 23 before heading to Spain on loan, and since then, the defending champions are 1-7-1 in their past nine and are just four points ahead of Orlando City and FC Cincinnati.

After ending a three-game losing streak with a 1-1 draw against Cincinnati on Sept. 7, NYCFC dropped a 1-0 decision in Charlotte last Saturday when it was blanked for the third time since Castellanos departed.

NYCFC followed up the loss to Charlotte with a 2-0 win Wednesday in the Campeones Cup over Atlas FC that has the team feeling good while also quickly pivoting its focus to Saturday.

“We just have to obviously enjoy this because it’s a big moment for us, it’s another trophy for the football club, but at the same time, the Red Bull game will be incredibly difficult,” NYCFC interim coach Nick Cushing said.