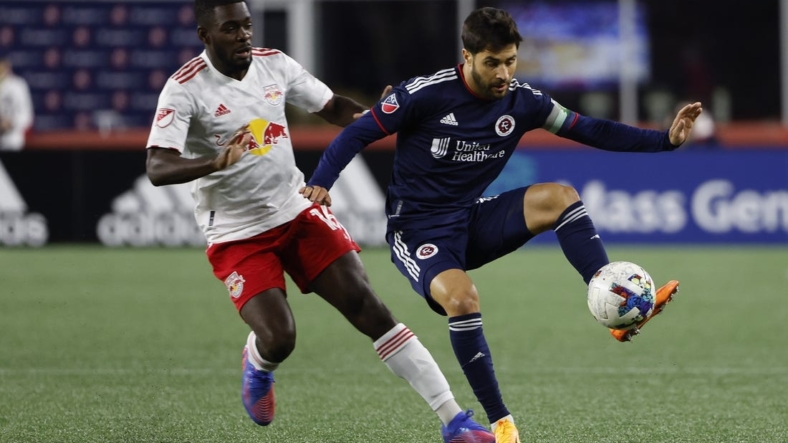 The New York Red Bulls expect a desperate effort from the visiting New England Revolution when they meet Saturday night at Harrison, N.J.

“We can see the power they can have when they get space,” Red Bulls coach Gerhard Struber said. “We know what comes on Saturday. It’s a little bit of a do-or-die game when we speak about the playoffs (for the Revs).”

New England (9-9-11, 38 points) is just out of playoff position in the Eastern Conference, one point behind seventh-place FC Cincinnati.

“They have the most cross balls in the league,” Struber said. “We know how they create. We have to bring a good situation of numbers in the right areas.”

The third-place Red Bulls (13-9-8, 47 points) have been a mystery in home games. Their 4-6-5 record on home turf is tied for the fewest home victories in the league.

Yet the Red Bulls are 3-1-1 in their past five games overall.

New York can generally count on midfielder Lewis Morgan, who hasn’t gone consecutive games without either a goal or an assist since April. He was without a spot on the scoring sheet in last week’s game vs. Philadelphia, so he’s due to produce against the Revolution.

The Red Bulls won’t have midfielder Dru Yearwood on the field for the remainder of the regular season stemming from a red card Sept. 3 vs. Philadelphia. An announcement of an additional suspension came Friday.

“It’s always disappointing when you lose players whatever the reason,” Struber said. “My plan and my focus is on the players who are able (to play).”

The Revolution have been erratic in terms of scoring touch. New England has been a shutout victim in four of its last nine games. But the most recent game Sunday resulted in a 3-0 victory against New York City FC to match its second-most goals in a game.

New England has had answers at the other end. Goalkeeper Djordje Petrovic has seven clean sheets in 16 MLS games this year.

Much of the Revolution’s strategy could depend on the injury status of several players. Brandon Bye missed a game with a lower leg injury and is on the injury list along Dylan Borrero, Wilfrid Kaptoum and Giacomo Vrioni — all with leg injuries.

New England coach Bruce Arena, who spent parts of two seasons (2006, 2007) as coach of the Red Bulls, said some Revolution players could be ready to return.

“We’re not at full strength at this point, but we feel good enough about the squad we have right now,” Arena said. “Hopefully, we can get a little bit healthier as we move toward the end of the season.”

The Red Bulls won 1-0 at New England on April 2, winning on a late own goal while playing with just 10 players on the field. There were 36 fouls called in the game, with 23 on New York.

New England has won just once (1-3-1) in its last five road matchups with the Red Bulls.