Red Bulls dominate but settle for 1 point vs. FC Dallas 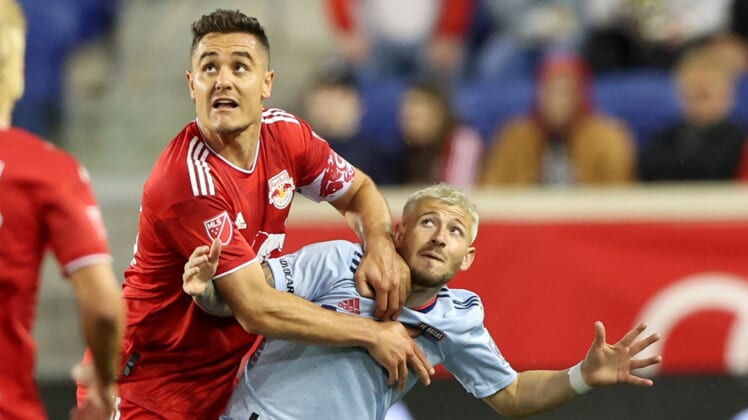 The New York Red Bulls had better chances and extended possessions but had to settle for a scoreless draw with visiting FC Dallas on Saturday night in Harrison, N.J.

The Red Bulls also benefited from a big save from goalkeeper Carlos Coronel late in the contest.

It was a frustrating point for New York, which dominated virtually every offensive category. The Red Bulls (3-2-2, 11 points) had 56 percent of the possessions, 20 shots to five for Dallas, seven shots on goal to two, 72 more passes and nine corner kicks to zero for the visitors.

FC Dallas (3-1-3, 12 points) had to feel very fortunate to get a draw, with goalkeeper Maarten Paes forced to make six saves and the defense having to make 38 clearances.

But the Red Bulls almost gifted FC Dallas a major opportunity when forward Tom Barlow came close to a red card with a high elbow that bloodied the face of FC Dallas defender Marco Farfan in the 87th minute.

The final 10 minutes were the most thrilling of the match, with Coronel stretching out to stop Franco Jara’s shot in the 83rd minute on what was FC Dallas’ best chance at a goal to that point.

Later, in second-half stoppage time, Jader Obrian just missed wide of the goal for the visitors.

After the key Coronel save, the Red Bulls had three great opportunities.

Patryk Klimala’s header was saved in the 85th minute, then Paes stopped a John Tolkin left-footed shot a minute later, and Klimala’s follow-up header glanced off the top of the goal.

New York is winless in five straight matches at home going back to late last season. It has two home draws and is 4-4-8 in its last 16 home matches.

FC Dallas is winless in its last nine away games (0-4-5) and hasn’t picked up a road victory since last August.