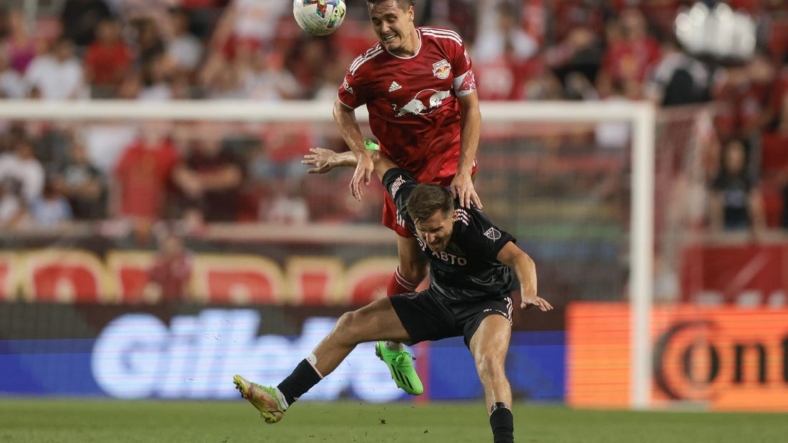 Both teams finished the match with 10 men.

Daniel Edelman added his first MLS goal for the Red Bulls (12-8-8, 44 points), who snapped a four-match home winless run after playing up a man for nearly half the match following Miami attacker Alejandro Pozuelo’s 29th-minute dismissal.

The contest became 10-on-10 when New York’s Kyle Duncan received his second yellow card in the 70th minute.

Gonzalo Higuain scored on an early direct free kick for his team-leading ninth goal for Miami (10-11-6, 36 points), which began the night holding the seventh and final East berth.

Drake Callendar made five saves for the visitors, who lost for the first time in six matches and were arguably the better side in the opening half-hour until Pozuelo’s dismissal.

Referee Fotis Bozakos originally issued just a yellow for the Spaniard’s high-footed challenge into the chest of Andres Reyes before upgrading it to red following a video review.

The match shifted in the Red Bulls’ favor and Morgan leveled in the 43rd minute on a nice attack down the left.

John Tolkin sprayed the ball wide to Cristian Casseres, and Casseres slotted a diagonal pass inside to Morgan, who ran onto it and drove a low shot past Callendar from about 10 yards out.

Edelman gave the Red Bulls the lead eight minutes after halftime when he beat Miami defenders to a loose ball near the penalty arc following a half-clearance, took one touch to control it and then hammered a firm finish that gave Callendar little chance.

Clark sealed it after another failed attempt by Miami to clear the danger. Dylan Nealis headed a loose ball over the top, Clark held his run to remain onside and then drove his finish past Callendar from in close.