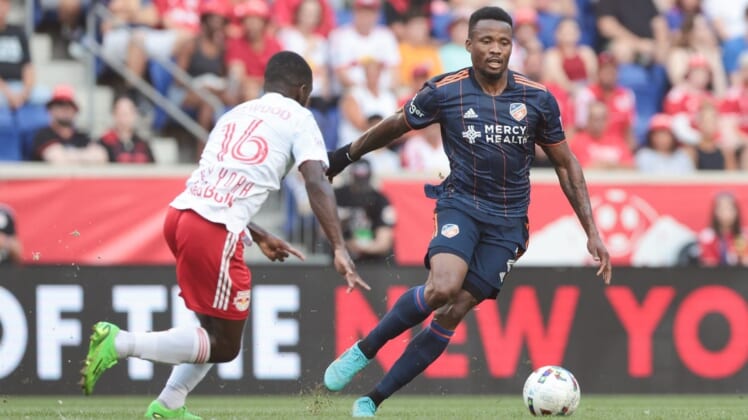 Patryk Klimala scored his first goal in over three months on a penalty kick in the 23rd minute as the New York Red Bulls rallied for a 1-1 tie with visiting FC Cincinnati on Saturday night in Harrison, N.J.

Klimala, 24, got his first MLS tally in 15 matches since May 18 against the Chicago Fire. It was his fifth of the season.

Goalie Carlos Coronel made a key stop on Brenner’s left-footed shot in the 87th minute for his only save to help New York (11-8-8, 41 points) stop a three-game home losing streak. New York is 3-5-5 at home and owns the fewest home wins of any team in playoff position in either conference.

FC Cincinnati dropped to 1-1-5 in their past seven matches and saw their road winless skid reach six games (0-2-3).

Cincinnati opened a 1-0 lead by cashing in during a set piece a minute after New York’s Cameron Harper missed the net.

Miazga got the ball in the center of the box off a pass from Alvaro Barreal and finished off a header that landed in the bottom right corner.

After Junior Moreno fouled New York defender Andres Reyes in the penalty area — the call was upheld on video review — Klimala converted the penalty kick by lifting a right-footed shot into the center of the net.

Lewis Morgan got a free kick In the 67th minute for RBNY but his attempt sailed high of the net.

Two minutes later, Brandon Vazquez nearly scored on a header but was called for a foul on New York’s John Tolkin.

New York missed a golden opportunity at taking the lead in the 73rd when Daniel Edelman’s open look off a corner kick sailed over the net.