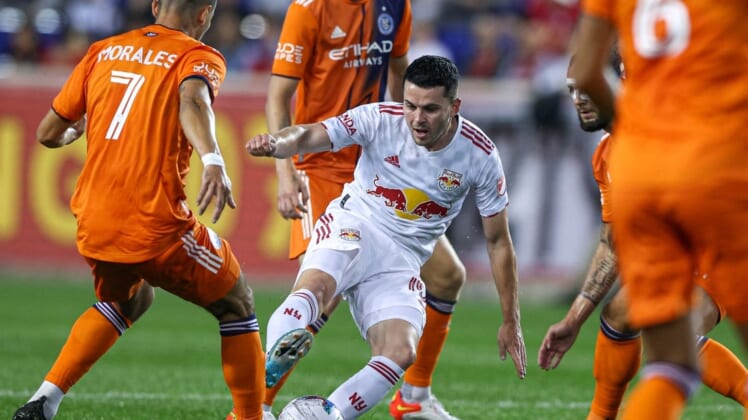 While Yankee Stadium will be rocking for a game between the Boston Red Sox and New York Yankees, the Red Bulls and New York City Football Club expect a similar atmosphere for the latest installment of the Hudson River Derby.

The rivalry reconvenes Sunday when NYCFC head to Harrison, N.J., for an important encounter with the Red Bulls in a matchup of teams trying to keep pace at the top of the Eastern Conference.

“They’ve traveled to Red Bull Arena, and they’re loud in Yankee Stadium,” NYCFC interim coach Nick Cushing said. “In whatever stadium we play we have that group of fans and we really rely on them, especially in the difficult moments, to push us over the line.”

NYCFC (10-4-5, 35 points) are in second place and two points ahead of the Red Bulls (9-5-6, 33 points). Both teams are trying to gain more separation from fourth-place Montreal while chasing Philadelphia for the top spot.

NYCFC are seeking a third straight win after victories over New England and FC Dallas. The defending champions followed up a 4-2 win at New England with Wednesday’s 1-0 win when Heber scored in the 29th minute in Frisco, Texas.

The Red Bulls are 2-0-1 over their past three matches and 4-2-1 in their past seven following a four-game winless skid (0-1-3) from May 7-22. New York has scored seven goals during a three-game home winning streak and Lewis Morgan has scored in his past four home matches.

“They have a lot of quality individuals with outstanding abilities to create good moments,” Red Bulls coach Gerhard Struber said. “We have to give some players absolutely no space or time to create something.”

The Red Bulls are returning to the pitch for the first time since July 9 when they overcame an early deficit for a 1-1 draw at FC Cincinnati. Morgan scored on a penalty kick but New York could not get the go-ahead goal despite playing against a short-handed opponent after the 58th minute.

Sunday is the first of two MLS meetings for the rivals, who also meet on Sept. 17 in Yankee Stadium. The Red Bulls won 3-0 in a U.S. Open Cup quarterfinal clash on June 22.