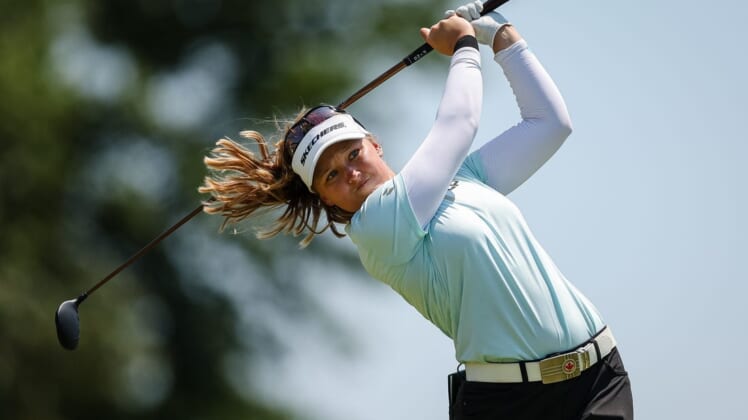 Canada’s Brooke M. Henderson shot 7-under-par 64 for the consecutive round to take a three-shot lead Friday at the midway point of the Evian Championship at Evian-Les-Bains, France.

The historic start made Henderson the first player in LPGA history to have consecutive rounds of 64 or lower to start a major tournament.

“It feels really nice to get off to a fast start in a major championship; feels like it’s been a while,” said Henderson, who owns one major title, the Women’s PGA Championship in 2016. “To get it this far under par is really awesome. And I feel like I’m hitting the ball really well, which is nice. Making some putts. So two solid days, and I’m just really looking forward to the weekend.”

Henderson is 14 under for the tournament and only Nelly Korda (11 under) is within five shots of the lead.

After being tied with Henderson at the end of the first round, Korda shot a 4-under 67, which was good enough for sole possession of second place. A group of two, who were two shots in back of Korda and tied for third place were Sei Young Kim (65) and So Yeon Ryu (66), both of South Korea. At 9 under, they’re one shot clear of a grouping of six tied for fifth at 8 under.

Despite a bogey 5 at the par-4 third hole, Henderson still managed to shoot the best round of the day. She had eight birdies, including five over her last eight holes, and shot a 5-under 31 on the back nine.

“Eight birdies I guess, so it’s fun to see the ball go in the hole,” Henderson said. “It’s cool, like I said, to have a fast start at a major. It’s been a while, and hopefully I can just keep the momentum rolling.”

Korda had a steady start to her day with 10 consecutive pars before a birdie at the par-4 11th hole. An eagle 3 at No. 18 left Korda 4 under over her final five holes. Her approach shot at 18 from 192 yards left her less than 3 feet from the cup.

“I was hitting solid shots (but) I wasn’t hit it as good as (Thursday),” Korda said. “Maybe hitting it as close, but I was still hitting solid putts. Honestly, they were kind of stress-free pars, and finally got one going on 11 and kind of kick started my day a little.”

Kim matched the second lowest round of the day by collecting a birdie on each of her last four holes. Ryu blistered the final eight holes, collecting six birdies, including one each on the final four holes as well.

“My mindset always push myself, but sometime (I can) poison myself, so it’s kind of tough to balance,” Kim said. “I have to push but relax. It’s tough. You know what you mean? It’s not easy but it’s not tough. I’m going to just do that.”

The six-pack tied for fifth place includes Andrea Lee and Sophia Schubert, who both matched Kim’s second-lowest round of the day at 65. Also tied at 8 under is Hyo-Joo Kim (66) of South Korea, the 2014 Evian Championship winner.