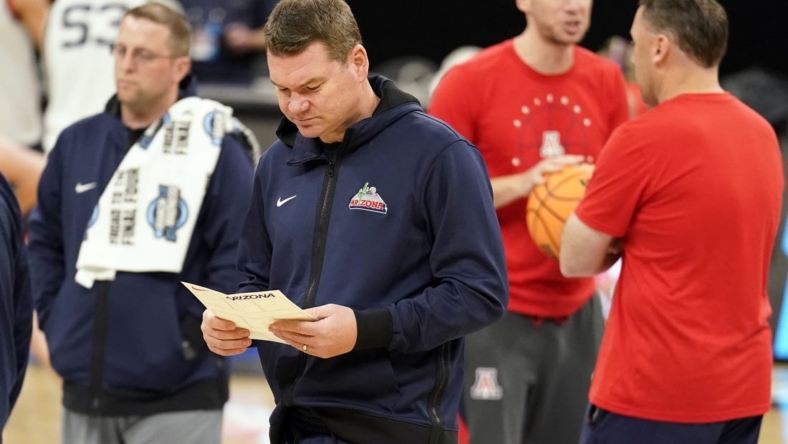 Azuolas Tubelis scored 20 of his 23 points in the first half, Pelle Larsson had a double-double and No. 17 Arizona set a school record for shooting percentage in a 117-75 victory over Nicholls in the season opener for both teams on Monday night in Tucson, Ariz.

Larsson had 16 points and 10 rebounds, while Tubelis’ frontcourt mate, Oumar Ballo, contributed 18 points and nine rebounds against the smaller Colonels. Adama Bal was a fourth double-digit scorer with 14 points. The Wildcats used 17 players, with walk-on Jordan Mains making a layup with 30 seconds left to push Arizona to the school shooting percentage record.

Indiana State transfer Micah Thomas was brilliant in his debut with Nicholls, scoring 20 points and draining 8 of 10 shots from the field, including all four attempts from behind the 3-point arc. Latrell Jones scored 16 points.

Arizona asserted its size advantage from the start with Tubelis and Ballo combining for 13 of the team’s first 16 points. That helped the Wildcats quickly take command with a game-defining 28-2 run that resulted in a 30-4 lead with 11:54 to go in the first half.

Although Nicholls’ ball pressure was a factor, forcing 13 first-half turnovers, the Wildcats responded with waves of offense. They shot 71.4 percent in the first half (20 of 28), including making 7 of 11 from 3-point range, and led 59-37 at the break.

Tubelis missed his first shot of the game but grabbed the rebound and scored. He made his next eight shots of the half and finished 10 of 12 for the game.

Arizona, which ended with 24 turnovers in its face-paced attack, assisted on 30 of 38 baskets.