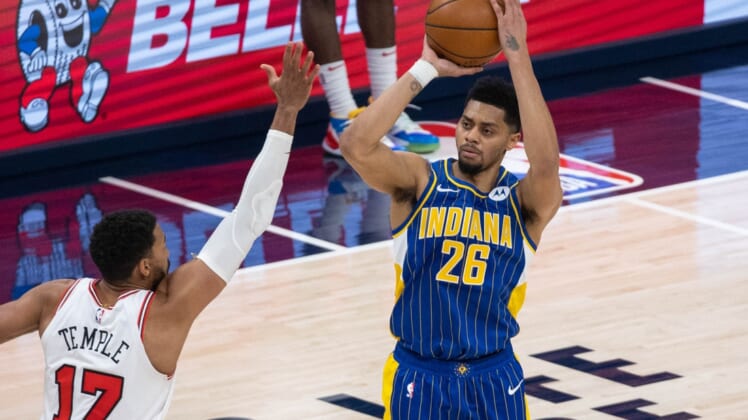 Zach LaVine continued to be prolific and clutch as he scored a game-high 30 points to lead the Chicago Bulls to a 120-112 overtime victory over the Indiana Pacers in Indianapolis on Monday night.

LaVine scored 12 of the Bulls’ final 15 in regulation and both Garrett Temple and Coby White scored clutch buckets in the extra period to help Chicago secure its first road win over the Pacers since March 29, 2016.

LaVine recorded his 12th 30-point game of the season and eclipsed the 20-point mark for the 13th consecutive game.

White (19 points, seven points and eight assists) and Temple (16 points, four rebounds) each made clutch buckets in the extra period as the Bulls picked up their first overtime win of the season and first this season over the Pacers.

White’s drive to the hoop with 1:51 left and Temple’s jumper later with just over a minute left gave Chicago seven-point leads as the Bulls outscored Indiana 15-7 in overtime.

LaVine had a chance to win the game at the end of regulation but missed a 17-footer as time expired. Malcolm Brogdon (23 points and 15 rebounds), one of six Pacers who scored in double figures, tied the game with 10.5 seconds left. On the play, Brogdon knocked over Thaddeus Young, but didn’t get a whistle, then nearly had the ball stolen by Temple but maintained possession and hoisted the shot off glass.

The Pacers erased an 11-point fourth quarter deficit, but went 9-of-33 from 3-point range and couldn’t hit enough clutch shots down the stretch.

Bulls center Wendell Carter Jr. played for the first time since Jan. 18th after missing the previous 11 games with a bruised right quadriceps. Carter Jr. finished with 11 points and nine rebounds in 21 minutes.

Thaddeus Young and Tomas Satoransky each had 13 points and Denzel Valentine finished with 11.