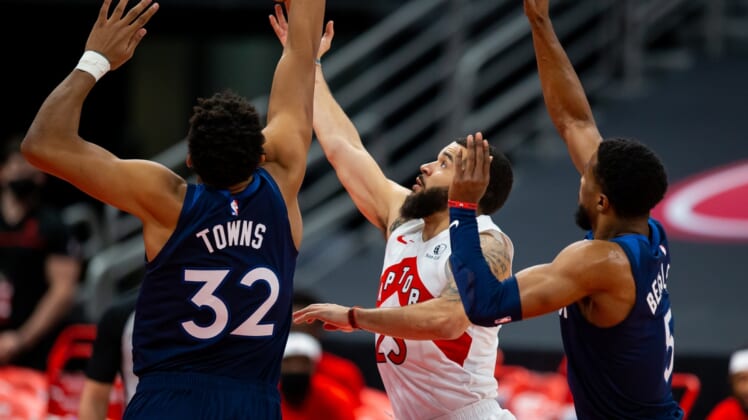 Karl-Anthony Towns scored 20 points, grabbed 11 rebounds and had three blocks before fouling out in the final minute and the visiting Minnesota Timberwolves defeated the Toronto Raptors 116-112 Sunday night at Tampa.

Pascal Siakam had a chance to tie the game for Toronto but missed a layup with 7.4 seconds to play.

Kyle Lowry had 24 points for Toronto while Norman Powell and Fred VanVleet each scored 22. Siakam added 18 points, eight rebounds and six assists. Aron Baynes fouled out with 2:18 to play and had six points and five rebounds.

The Raptors led by four points at halftime, but the Timberwolves used a 37-25 third quarter to take an eight-point lead into the fourth quarter.

Lowry’s two free throws cut the lead to two and his 11-footer tied the game at 96 with 7:27 to play. The Timberwolves later responded with a 7-0 run capped by Vanderbilt’s dunk and they led by seven with 4:43 left.

Powell’s layup brought the Raptors to within two. Towns answered with a 3-pointer for a five-point Minnesota lead with 3:16 left.

The Raptors cut the lead to two when DeAndre’ Bembry made a layup and a free throw as Towns fouled out with 38 seconds to play.

Edwards sank two free throws and Lowry answered with a layup to keep the margin at two. After a Minnesota turnover, Siakam missed a layup.

The Timberwolves used an 8-2 burst to take a two-point lead in the third quarter. Powell’s six-footer capped a 6-0 run that restored Toronto’s four-point lead.

The Timberwolves later opened a 12-point advantage on Naz Reid’s layup with 1:04 left in the period and led 91-83 after three quarters.