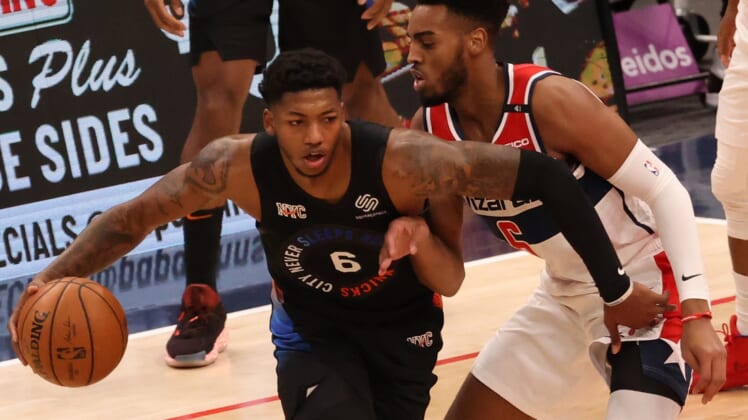 Washington held out Bradley Beal, the NBA’s top scorer at 32.8 points per game, for a rest day, and struggled to find consistent offense.

But the Knicks found their offense, especially down low, and led most of the game. They dominated in the paint, finishing with 58 points there and outrebounding the Wizards 65-46.

Mitchell Robinson managed a double for the Knicks in the first half — 10 points and 14 rebounds in 20 minutes. But he left in the first half and did not return because of the the team said later was a fractured right hand.

With Robinson leading the way, the Knicks outrebounded the Wizards 36-22 in that first half. Also, New York scored 34 points in the paint en route to a 53-42 lead at the break.

In the first quarter, the Knicks used an 11-point run and controlled play inside and often had comfortable leads en route to a 30-23 edge heading into the second quarter.

Washington cut the lead down a few times, but New York answered each time, often led by Robinson, for the halftime advantage.

The Wizards cut the lead to six late in the third quarter. But they turned it over a few times, and Randle scored five points in a nine-point run that gave the Knicks a 79-64 lead heading into the fourth quarter.

New York stretched its led to 20 before Westbrook’s three-point play early in the fourth period, but the Knicks were already in command.