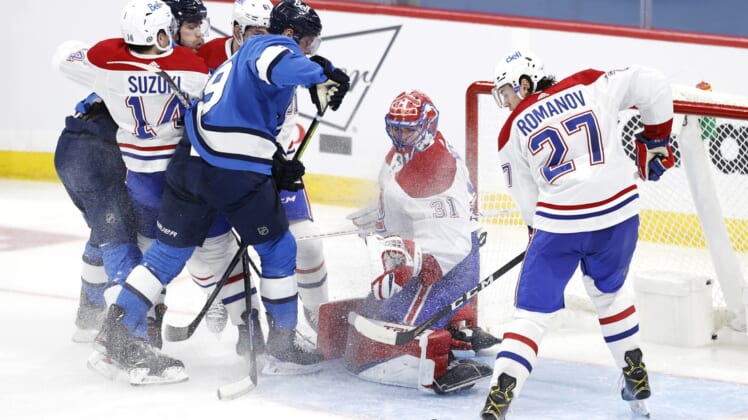 Nikolaj Ehlers scored 55 seconds into overtime to lift the host Winnipeg Jets to a 4-3 win over the Montreal Canadiens.

Kyle Connor had two goals and Blake Wheeler scored once for the Jets. Pierre-Luc Dubois chipped in two assists. Phillip Danault, Brendan Gallagher and Tyler Toffoli countered for the Canadiens.

With Jets head coach Paul Maurice skating three forwards in overtime, the Canadiens’ Jeff Petry coughed up the puck and gave Winnipeg a 3-on-2. Ehlers took the shot and ripped it through Price’s 5-hole for the victory.

The Canadiens scored twice in the third period to force overtime. They cut the lead to one at 5:58 when Danault lost the faceoff to Adam Lowry. Gallagher picked him off and skated in for a quick shot.

With 1:25 left in the second, Toffoli snuck around the back of the Jets net and took a perfect pass from Corey Pass to surprise Jets goalie Connor Hellebuyck, caught out of position. It was Toffoli’s 18th goal of the season.

The Jets scored quickly to start the game. The Canadiens got stuck clearing the puck out of their own end in the first minute. Wheeler ended up with an open shot on Canadiens goaltender Carey Price at the 50-second mark.

The Jets padded their lead to 2-0 at 15:46 when defenseman Xavier Ouellet bumped into Price, drawing his own goalie out of the play. Connor was left with a wide-open net to score easily.

Danault got the Canadiens within one at 1:26 of the second. Thomas Tatar broke across the blueline and dished the puck over to Danault on a 2-on-1 against Jets defenseman Tucker Poolman. Danault took the shot and fooled Hellebuyck with a quick wrist shot.

Connor restored the two-goal lead at 13:42. He picked the puck from the Jets and got down low to pounce on a rebound off Dubois’ shot to beat Price.

The Canadiens outshot the Jets 36-30.