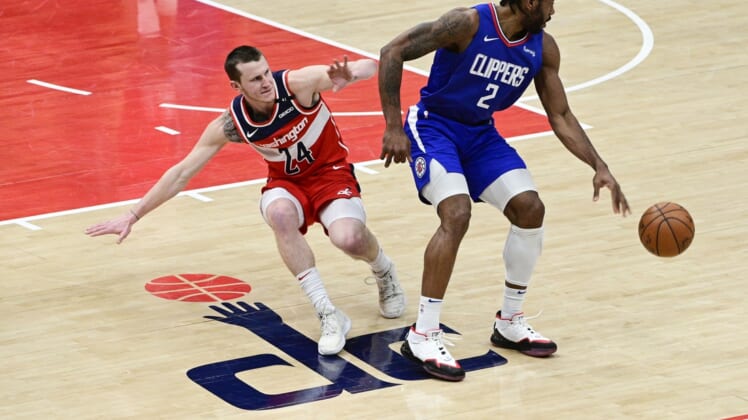 Bradley Beal had 33 points and seven rebounds, and the Washington Wizards rallied to beat the visiting and short-handed Los Angeles Clippers 119-117 on Thursday.

Russell Westbrook finished with 27 points, 11 assists, nine rebounds and four steals for the Wizards, who trailed by as many as 16 in the first half. Moritz Wagner scored 12 points with three steals and Davis Bertans and Raul Neto chipped in 11 points apiece.

Kawhi Leonard, who returned after missing Tuesday’s loss to the Boston Celtics with back spasms, led seven Clippers scoring in double figures with 22 points. Patrick Beverley had 17 points, Lou Williams contributed 16 and Terance Mann and Luke Kennard had 14 apiece. Ivica Zubac collected 13 points and 13 rebounds, while Reggie Jackson scored 12 points for the Clippers, who lost three straight for the first time this season.

Zubac hit two foul shots with 8.5 seconds remaining to close the gap to one before Rui Hachimura missed one of two free throws with seven seconds left. But Beal grabbed the offensive rebound to seal the win for Washington, which ended a two-game slide.

Washington wiped out a seven-point, halftime deficit with a 19-7 surge to open the third quarter after Westbrook banked in a jumper with 5:22 left for a 73-68 edge.

The two teams were tied at 87 heading into the fourth quarter.

However, Washington scored the final nine points of the second to slice the gap to 61-54 at the break.