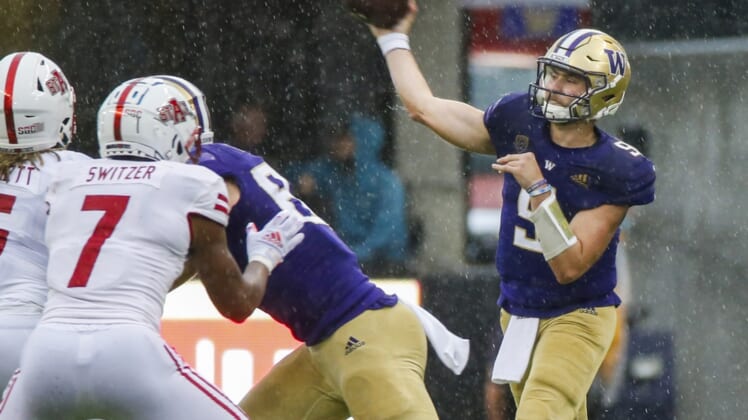 Dylan Morris threw for a career-high 367 yards and three touchdowns as Washington earned its first victory of the season, defeating Arkansas State 52-3 on a rainy Saturday afternoon in Seattle.

The Red Wolves (1-2), who entered the game fourth nationally with 596.5 yards of total offense per game, were limited to just 268 while UW amassed 598.

The Huskies (1-2), upset by Montana of the Football Championship Subdivision in their home opener before a loss last week at Michigan, went three-and-out on their first possession. But the Huskies scored touchdowns on their next four drives — all 70 yards or longer — to take a 28-0 lead with 10 minutes remaining in the second quarter.

Washington got a boost from two players making their season debuts — wide receiver Jalen McMillan and running back Sean McGrew. McMillan, who suffered a hand injury midway through fall camp, had 10 receptions for 175 yards and a touchdown. McGrew, a preseason Doak Walker Award candidate, hadn’t played in the first two games but rushed for two scores.

Richard Newton Jr., who led the Huskies with 52 yards rushing on 10 attempts, scored on a 2-yard run early in the second quarter.

McMillan caught a 33-yard scoring strike from Morris with 10 minutes left in the half.

McGrew scored on a 2-yard run with 4:37 left in the third quarter to make it 35-0 before the Red Wolves finally got on the board on Blake Grupe’s 26-yard field goal.

Terrell Bynum caught a 42-yard touchdown pass from Morris with 13:59 remaining to make it 42-3.

UW linebacker Bralen Trice returned a fumble 72 yards for a touchdown with 3:34 to go.

Arkansas State’s James Blackman completed 16 of 38 passes for 176 yards. Backup Layne Hatcher entered in the fourth quarter and was 6 of 11 for 44 yards.

The Red Wolves’ Lincoln Pare made seven catches for 69 yards. Johnnie Lang was their leading rusher with 18 yards on six carries.