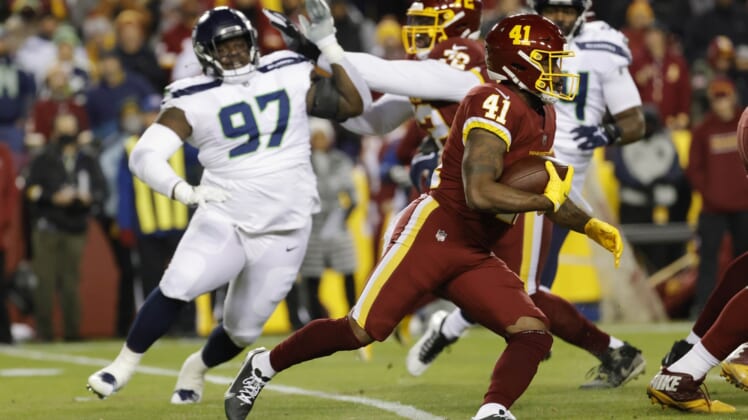 Washington (5-6) took the lead for good when McKissic rushed 10 yards for a tie-breaking touchdown with 8:30 left in the third quarter. With kicker Joey Slye out due to a hamstring injury, Washington went for two and Antonio Gibson ran it in.

That became the difference when Seattle (3-8) drove 96 yards and pulled within two points when Russell Wilson hit Freddie Swain with a 32-yard scoring strike with 15 seconds left. Wilson tried to connect with Swain on the two-point conversion, but Fuller intercepted the pass.

The Seahawks appeared to recover the ensuing onside kick but were flagged for an illegal formation. Washington’s Adam Humphries recovered another onside kick to seal the outcome.

Taylor Heinicke completed 27 of 35 passes for 223 yards with a touchdown and an interception for Washington. Gibson rushed 29 times for 111 yards.

After both teams went three-and-out to start the game, Washington kept the ball for nearly 9 1/2 minutes on its next possession. The drive stalled at the Seattle 5-yard line, so Slye kicked a 23-yard field goal at the 2:59 mark to initiate scoring.

Seattle responded with a six-play touchdown drive that Wilson finished with a 6-yard dart to Gerald Everett with 20 seconds left in the first quarter. Wilson’s 55-yard connection with Tyler Lockett set up the score.

Neither team scored again until 56 seconds remained in the first half. That’s when Heinicke flipped a short pass to McKissic and the running back did the rest for a 10-yard touchdown.

Washington’s 9-7 lead was short-lived. Rasheem Green blocked Slye’s low PAT attempt, scooped up the ball and rumbled into the end zone for a defensive two-point conversion that evened the score entering halftime.