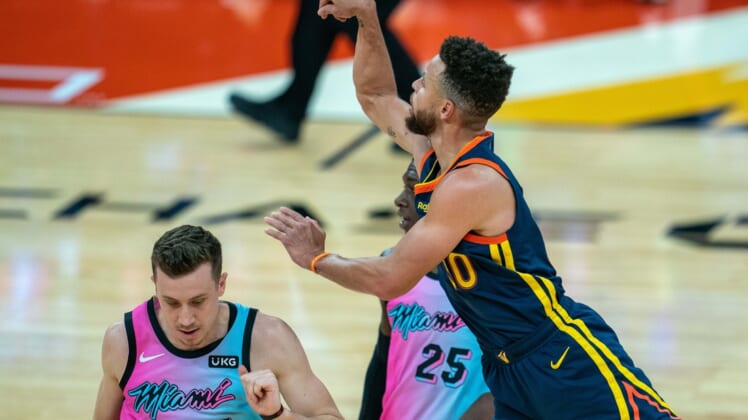 Stephen Curry brushed aside his worst shooting night in three weeks with a pair of 3-pointers in overtime, including a go-ahead hoop with 1:15 to go that propelled the host Golden State Warriors to a come-from-behind, 120-112 victory over the Miami Heat on Wednesday night in San Francisco.

After trailing by as many as 19 points in the first half and by 14 with under seven minutes remaining in regulation, the Warriors rallied to force overtime, then got the better of the Heat thanks to Curry’s late treys that bookended one by Andrew Wiggins.

The Warriors never held the lead until 1:38 remained in overtime, when Kent Bazemore tipped in a layup to go ahead 109-107.

Attempting to become the first guard since Michael Jordan in 1995-96 to record 11 consecutive games with at least 25 points while making at least half his shots, Curry failed on both fronts Wednesday, finishing with 25 points on 8-for-25 shooting. He missed 13 of his first 18 3-point attempts before connecting on the last two.

Curry also found time for a game-high-tying 11 assists and got a lot of help from Bazemore with a season-best 26 points while Wiggins and Kelly Oubre Jr. added 23 apiece.

Golden State, which experienced a setback when Draymond Green couldn’t play because of a sore right ankle, won its second straight to go three games over .500 for the first time this season.

Down 99-85 with 6:40 to go, the Warriors rallied down the stretch to force the overtime.

Bazemore’s driving layup with 52 seconds remaining capped a 20-6 run that drew Golden State even at 105-all.

Neither team scored after that in regulation, with Miami’s Jimmy Butler missing a short jumper, Oubre misfiring on a 3-pointer and the Heat’s Kendrick Nunn failing to connect on a buzzer-beating runner.

Butler (13 points, 12 rebounds, 11 assists) had a triple-double and Tyler Herro (11 points, game-high 15 rebounds) a double-double for the Heat, who lost their third straight while playing the middle contest of a seven-game trip.

Nunn had 14 of his points in the first half, during which the Heat took advantage of rare poor 3-point shooting by Curry to build as much as a 19-point advantage.