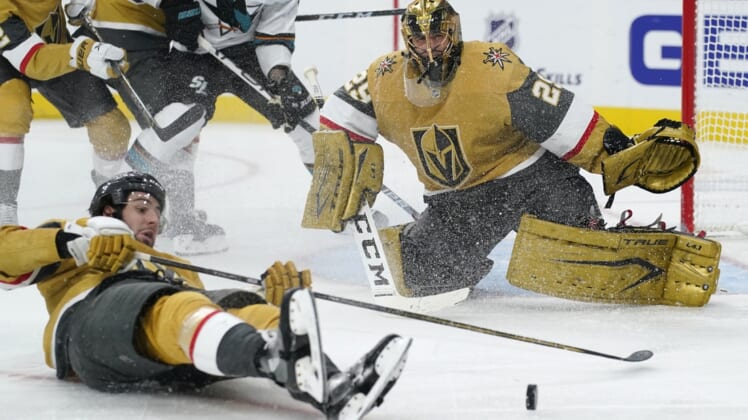 Shea Theodore had a goal and two assists and Ryan Reaves scored his first goal of the season as the Vegas Golden Knights rallied from a two-goal deficit in the third period to defeat the visiting San Jose Sharks 5-4 Wednesday night.

Cody Glass, Nicolas Hague and Alec Martinez also scored and Marc-Andre Fleury made 29 saves for the Golden Knights, who extended their winning streak to four games.

Tomas Nosek added two assists as Vegas improved to 5-0-0 against San Jose this season and 13-1-3 since joining the NHL as an expansion team in the 2017-18 season.

Reaves, who had a goal disallowed in the second period because of a goaltender-interference call, broke a 3-3 tie at 12:27 of the third period, redirecting Nosek’s shot from the point past Dubnyk.

Martinez added a power-play goal at 14:46, which proved to be the winner as Kane scored for San Jose with the man advantage at 15:54.

Trailing 3-1 entering the third, Glass pulled the Golden Knights within 3-2 on a power-play goal at 6:43, converting a rebound of a shot by Theodore.

Hague tied it at 10:03 of the period on a slap shot from above the top of the faceoff circles past a screened Dubnyk.

Theodore gave the Golden Knights an early lead, blistering a slap shot from the right point past Dubnyk at 3:45 of the first.

The Sharks scored three unanswered goals in the second period.

Nieto tied the score at 6:21, tipping the puck over Fleury’s right shoulder from the top of the crease off a pass from Timo Meier from the left-wing corner.

Ferraro gave the Sharks a 2-1 lead at 7:57, scoring on a wraparound after John Leonard’s shot went wide of the net.

Labanc extended the lead at 15:07 off a rebound of a shot by Kane.

Vegas’ Robin Lehner, out since Feb. 7 due to a concussion, dressed and served as Fleury’s backup.