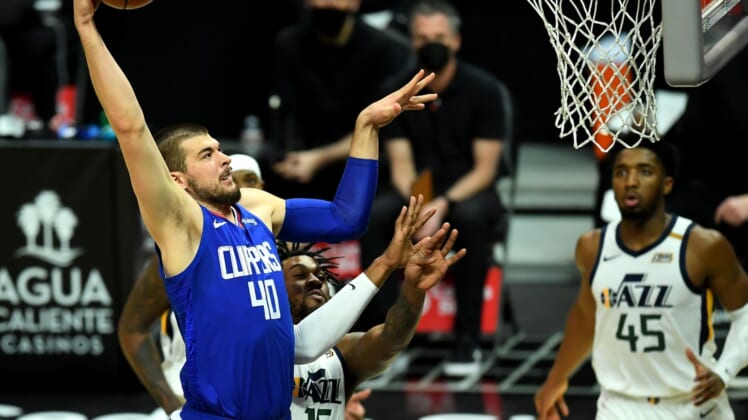 Donovan Mitchell had 24 points, seven rebounds, seven assists and four steals, and the Utah Jazz captured their ninth consecutive victory, a 114-96 decision over the host Los Angeles Clippers on Wednesday.

Rudy Gobert contributed 23 points on 8-of-12 shooting and grabbed 20 rebounds for the Jazz, who have won 20 of their past 21 games. Utah’s lone setback during that stretch came on Jan. 31 at Denver.

Jordan Clarkson came off the Utah bench to score 18 points while Joe Ingles chipped in 14 points and five assists. Royce O’Neale had 12 points and eight boards.

The Clippers again played without Kawhi Leonard (leg), Paul George (toe) and Nicolas Batum (concussion). Although the Clippers were able to earn a surprising win over the Miami Heat on Monday without the three and Patrick Beverley (rest), they had no such luck against the Western Conference-leading Jazz.

Neither team led by more than six points through the first three quarters. However, the Jazz seized control in the fourth, using a 19-7 surge for a 100-82 lead after Clarkson’s 3-pointer with 6:53 remaining. Los Angeles never recovered.

The Clippers wiped out an early deficit with an 11-2 run for a 38-34 edge after a foul shot by Williams midway through the second quarter. A bucket by Utah’s Derrick Favors knotted the score at 40, but the Clippers regained the lead and grabbed a 51-46 advantage at the break.

The Clippers outshot the Jazz 48.8 percent to 38.8 percent in the first half. Overall, the Jazz converted 42.9 percent from the floor while the Clippers made 44.2 percent.

Los Angeles was hurt by 18 turnovers while Utah gave the ball away 13 times.