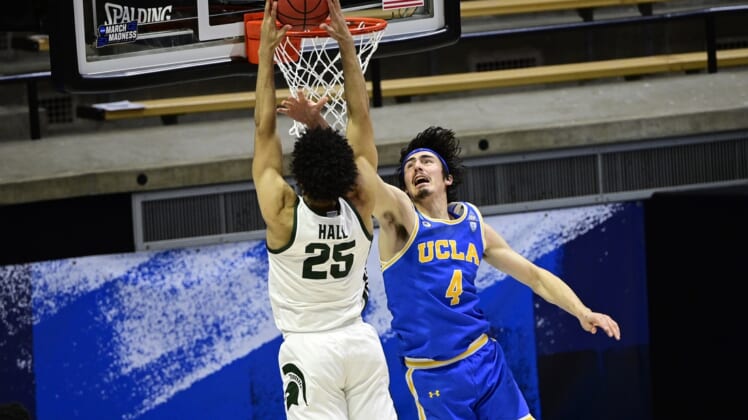 Johnny Juzang had 21 points for the Bruins (18-9), who will face sixth-seeded BYU in an East Region first-round matchup on Saturday. UCLA’s Cody Riley and Jules Bernard each contributed 11 points.

Two baskets by Juzang gave the Bruins a four-point lead in overtime. Riley’s dunk with under a minute to go gave UCLA an 83-78 lead. Langford made a layup, and Juzang injured his ankle when he stepped on Langford’s foot on the play.

The Spartans’ 11-point halftime lead shrunk to 48-45 during the first three minutes of the second half. Jaquez and Juzang scored five points apiece during that 10-2 UCLA run.

The Spartans weren’t down for long. They scored the next seven points, capped by Hall’s three-point play.

Jaquez converted a three-point play with 28.7 seconds left to tie it at 77-apiece. Henry shot an airball and UCLA got the ball back with 3.3 seconds left. Juzang’s half-court heave bounced off the rim, sending the game into overtime.

Michigan State held a 44-33 halftime lead after its biggest lead was 40-26 following a 3-pointer by Joey Hauser.