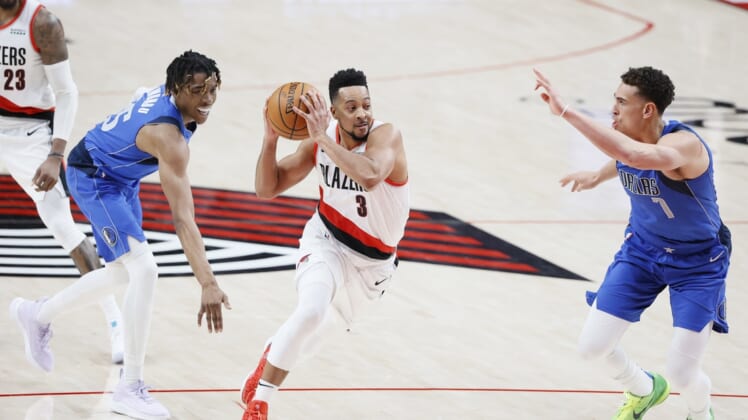 CJ McCollum scored 32 points and Damian Lillard added 31 as the Portland Trail Blazers opened a two-game set against the visiting Dallas Mavericks with a 125-119 victory on Friday.

Billed as a duel of superstars, Lillard got help from McCollum to earn the victory over the Mavericks and Luka Doncic, who scored 38 points. Portland’s Terry Stotts earned his 500th career victory as an NBA head coach.

The victory was the seventh in the past nine games for the Trail Blazers and the third consecutive since McCollum returned from a two-month absence caused by a hairline fracture in his foot. Carmelo Anthony had 18 points off the bench for Portland, and Enes Kanter contributed 14 points and nine rebounds.

Doncic added nine rebounds and nine assists for the Mavericks while Tim Hardaway had 25 points and Maxi Kleber added 16. Dallas lost for the third time in the past five games.

While McCollum was part of the supporting cast in consecutive victories this week upon his return, he took more of a starring role Friday. He shot 11 of 23 from the field and sealed the victory on a step-back 3-pointer with 1:17 remaining that gave Portland a 118-112 advantage.

Midway through the second quarter, McCollum already had 12 points, the most since his return.

Portland held a slim 64-60 lead at the half, then pushed its advantage to as many as seven twice in the third quarter.

Dallas made a charge late in the period just as Lillard was dealing with a knock to his knee. The Mavericks’ Josh Richardson landed on Lillard’s left knee while both players hit the court chasing a loose ball with 2:37 remaining in the third.

The game was tied 86-all with 3:56 remaining in the third quarter before Dallas grabbed a 105-98 lead. The Blazers took charge from there as McCollum scored 11 points in the final period as Portland outscored Dallas 32-21.