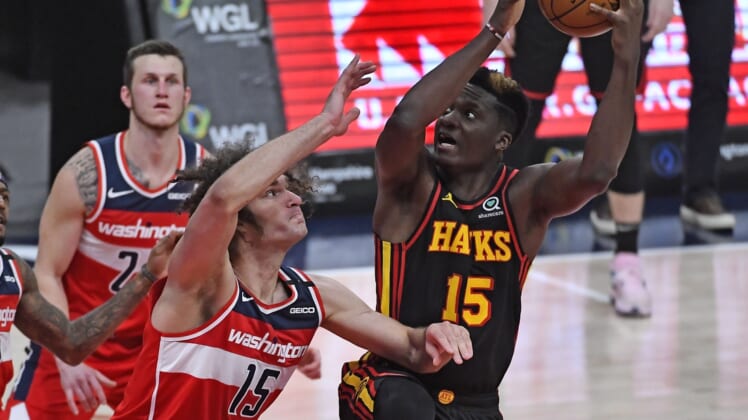 Trae Young stalled a Washington rally with his fourth 3-pointer of the game and added a fifth shortly thereafter, helping the visiting Atlanta Hawks hold off the Wizards 116-100 on Friday night.

Young went for 41 points in a head-to-head with NBA scoring leader Bradley Beal, propelling the Hawks to a fifth win in their last seven games.

Beal, who began the day with a 35.4-point scoring average, had 26 points for the Wizards, tying Russell Westbrook for team-high honors.

After leading by as many as 23 in the third quarter, the Hawks found themselves in a game after the Wizards ran off 11 straight points to get within 102-92 with still 5:08 remaining. Rui Hachimura had five of the 11 points, including a 3-pointer.

But Young countered with a 3-pointer at the 4:53 mark, then added another 29 seconds later to help the Hawks pull away.

Young finished 10-for-18 from the field, 5-for-9 on 3-pointers and 16-for-17 at the free throw line en route to his second-highest point total of the season. He had a season-high 43 at Minnesota last Friday.

It was his eighth time over 30 points this season.

John Collins chipped in with 17 points, Clint Capela with a 13-point, 14-rebound double-double and Danilo Gallinari with 11 points off the bench for the Hawks, who were coming off a 132-128 overtime loss at home to Brooklyn.

Beal’s 26 points left him four shy of a seventh straight game with 30 or more. He shot 10-for-26 overall, but missed all eight of his 3-point attempts.

Westbrook bombed in three 3-pointers during his 26-point performance, but the Wizards were outscored 36-21 by the Hawks from beyond the arc.

Garrison Mathews added 10 points off the bench for Washington, which lost its fourth straight in the opener of a three-game homestand.

The Hawks never trailed after a layup by Onyeka Okongwu put them up 18-17 at the 2:52 mark of the first quarter.

Atlanta extended the advantage to as many as nine points in the first quarter, 13 in the second and 23 in the third before the Wizards rallied.