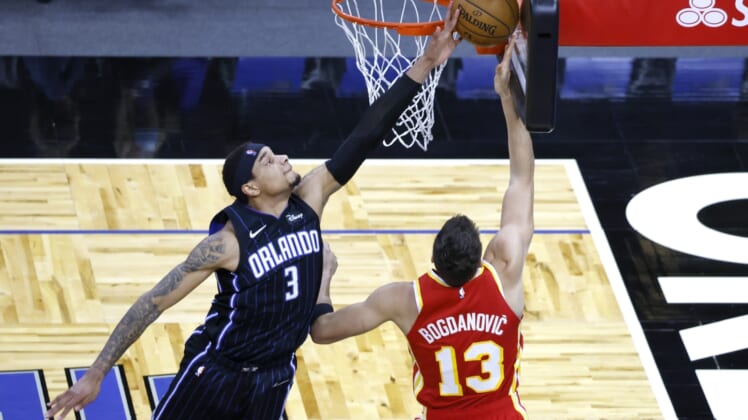 Trae Young scored 32 points and made the two winning free throws with eight seconds remaining to complete a 19-point second-half comeback and give the visiting Atlanta Hawks a 115-112 win over the Orlando Magic on Wednesday.

The Magic had a chance to win it when Terrence Ross missed a runner with 1.1 seconds and Atlanta’s John Collins grabbed the rebound. Collins was fouled and made both free throws with 0.6 seconds remaining.

The Hawks took the lead for the first time on Tony Snell’s 3-pointer with 1:09 remaining. But the Magic regained the lead after Nikola Vucevic scored on a rebound of Al-Farouq Aminu’s missed layup with 18 seconds left.

Young was 9-for-19 from the floor, 10-for-11 at the line, and had eight assists. Undersized Danilo Gallinari was forced to start at center when Clint Capela was idled by a sore foot, and he came up with 23 points, five 3-pointers, and nine rebounds. Collins added 15 points and nine rebounds.

The Magic got 29 points, 18 in the first half, and nine rebounds from Vucevic. Ross scored 28 points, including four 3s, and Michael Carter-Williams scored 20. Aminu scored a season-high 14. Orlando was a perfect 27-for-27 from the line.

Orlando cooled off a bit in the second quarter, but led by as many as 17 points and carried a 61-42 advantage into halftime.

The Hawks changed their strategy in the third quarter and began driving to the basket rather than settling for perimeter shots. The result was a 16-2 run, capped by Young’s three-point play, that cut the lead to 66-61 at the 6:55 mark. The momentum was short-lived and Orlando led 90-78 after three quarters.