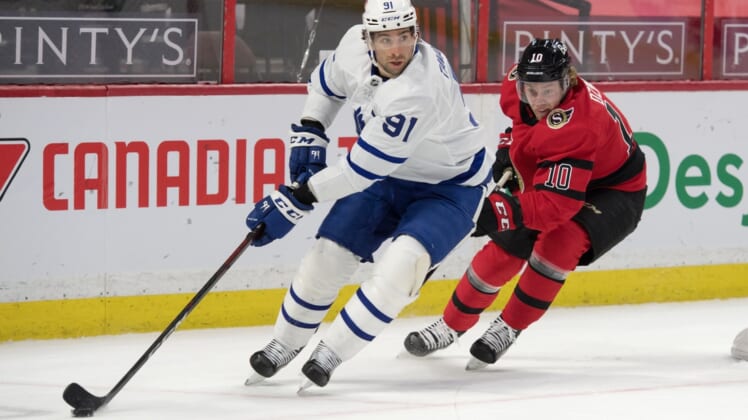 Justin Holl scored with 18 seconds remaining in overtime to give the Toronto Maple Leafs a dramatic 3-2 road victory over the Ottawa Senators on Thursday.

Auston Matthews made a strong defensive play to prevent a Senators odd-man rush in overtime, then sent the puck back the other way to create a Toronto scoring chance. The result was Holl’s second goal of the season.

Connor Brown and Alex Formenton scored for the Senators, who have recorded points in each of their last six games (3-0-3).

Brown’s goal was a short-handed marker that gave Ottawa the lead 18:53 into the first period. Leafs goalie Jack Campbell was trying to clear the puck behind his net when Chris Tierney rushed in on the forecheck. Campbell sent a partially deflected pass in front of the net, and Brown easily converted for his seventh goal of the season.

After that tough opening concession, the Maple Leafs had better fortune in finding the equalizer. T.J. Brodie’s shot off the crossbar at 14:40 of the second period deflected off Mikheyev’s body and into the Ottawa net. The referee initially waved off the score, but video review confirmed Mikheyev’s fifth goal of the season.

Spezza scored for the third consecutive game after blasting home a wrist shot from the slot midway through the third period.

Formenton brought the Senators level at 13:14 of the third period. Campbell had to handle the puck after a deflection off the boards, and another aggressive Ottawa forecheck resulted in Formenton converting his second career NHL goal.

Playing in just his second game of the season and the 12th game of his NHL career, Formenton scored for the first time since October 30, 2018.

Anton Forsberg stopped 38 of 41 shots in his first NHL game since March 7, 2020. Ottawa claimed Forsberg off waivers from the Winnipeg Jets last week to add depth after the Senators’ top three goalies were all sidelined by injury.

The Maple Leafs are 4-2-1 in seven games against the Senators this season.