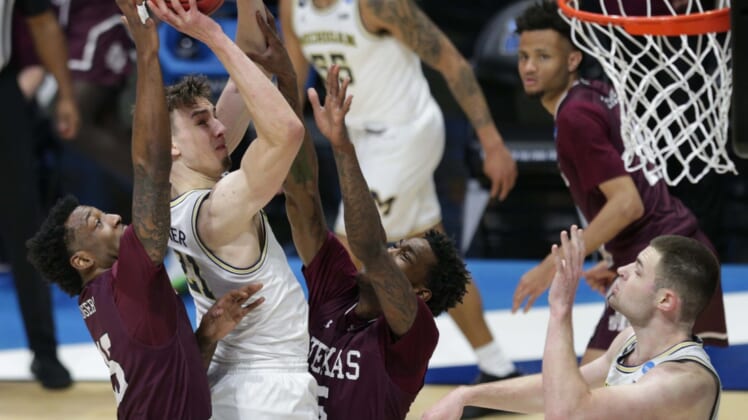 Michigan Wolverines guard Franz Wagner (21) shoots while being guarded by Texas Southern Tigers players during the first round of the 2021 NCAA Tournament on Saturday, March 20, 2021, at Mackey Arena in West Lafayette, Ind. Mandatory Credit: Nikos Frazier/IndyStar via USA TODAY Sports

They’ll face eighth-seeded LSU, a 76-61 winner over ninth-seeded St. Bonaventure on Saturday, in the second round on Monday.

Michael Weathers scored 24 points to lead Texas Southern (17-9). John Walker III added 11 points for the Tigers, who were held to 35.9 percent shooting and made just one of 12 3-point attempts.

Texas Southern tied its season low in first half points as Michigan raced to a 42-24 halftime lead. Five Wolverines players scored at least six points, while Weathers carried the Tigers with 12 points.

The Wolverines established their first double-digit lead, 19-8, at 11:32 of the first half when Wagner scored after a Texas Southern turnover.

Zeb Jackson drained a 3-pointer after another Tigers turnover to give his club a 29-12 lead with 7:35 left in the half.

Texas Southern scored the next eight points, including four free throws by Weathers, to cut Michigan’s advantage to nine points.

Dickinson scored inside to give Michigan a double-digit lead again at 5:29 and the margin stayed there the rest of the way.

Brooks hit a 3-pointer in the first minute of the second half to give the Wolverines a 46-24 lead.

Johns drained a 3-pointer with 15:31 left for a 55-31 Michigan advantage. Texas Southern scored the next six points.

The Tigers also had a 7-0 spurt to pull within 12 points at 73-61. Wagner ended any drama by nailing a 3-pointer with under two minutes left.