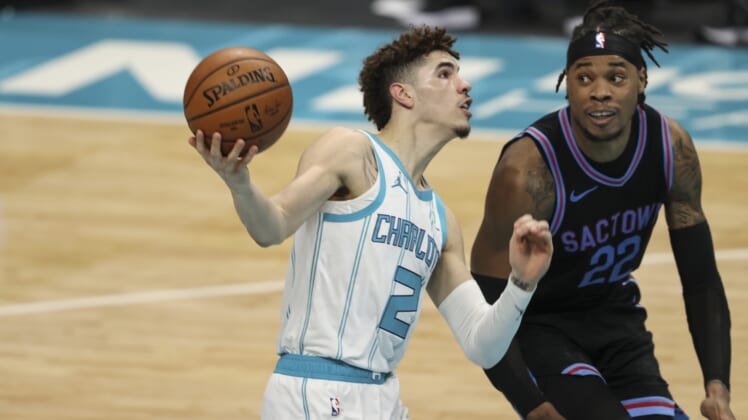 Terry Rozier had a big late-game stretch, including a go-ahead 3-point basket, to finish with 26 points as the Charlotte Hornets rallied to defeat the visiting Sacramento Kings 122-116 on Monday night.

Rozier pumped in nine points in the last 5:08, helping the Hornets win their fourth game in a row. He hit a tiebreaking 3-pointer with 54 seconds to play.

From the time the game was tied 113-113, Charlotte scored the next seven points before Buddy Hield’s 3-pointer with 8.4 seconds to play.

De’Aaron Fox racked up 29 points, Hield had 23 points, Richaun Holmes poured in 17 points to go with 15 rebounds and Harrison Barnes added 13 points for the Kings, who have lost the first two outings of a six-game road trip.

Sacramento scored only six points in the game’s final 4 1/2 minutes. The Kings compiled 37 points in the first quarter but failed to exceed 30 points in any of the last three quarters.

It unfolded in a similar manner to Charlotte’s one-point victory Feb. 28 in Sacramento, with the Kings leading for most of the game.

The Kings went up 82-67 early in the third quarter. A 3-pointer from Barnes to beat the shot clock helped them maintain a double-digit lead.

But the Hornets had some things go their way in the quarter, with Graham connecting on three 3s. An 8-0 run trimmed the deficit to 91-88.

Charlotte’s reserves outscored the Kings backups 22-2 in the third quarter.

The Kings played the second half without forward Marvin Bagley III, who injured his left hand in the first half. He scored 12 points before the break.