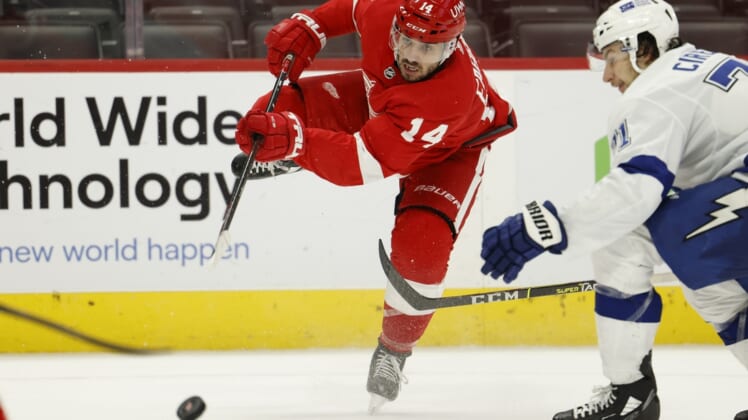 Blake Coleman scored at 2:17 of the overtime period and the streaking Tampa Bay Lightning edged the host Detroit Red Wings 4-3 on Tuesday.

Coleman took a pass from Tyler Johnson and flipped the puck over goaltender Thomas Greiss’ right arm for the game-winner. Brayden Point, Johnson and Erik Cernak scored regulation goals for the Lightning, who are 8-0-1 over the last nine games. They’re also 19-0-1 in the last 20 meetings with Detroit.

Andrei Vasilevskiy made 20 saves for Tampa Bay, which recorded its third victory over the Wings this season.

Adam Erne, Patrik Nemeth and Dylan Larkin scored for Detroit and Greiss made 25 saves. The Red Wings are winless in their last four games.

With a malfunctioning horn going off periodically, the Lightning took a 2-1 lead in the opening period.

Detroit scored the first goal after Tampa’s Steven Stamkos was whistled for a double minor for high sticking. Erne scored in front, flipping the puck off Vasilevskiy’s pad and into the net. Filip Zadina and Filip Hronek recorded the assists.

The Wings’ Marc Staal was sent to the penalty box for interference and the Lightning cashed in. Point one-timed a shot from the slot off a pass from Ondrej Palat. Victor Hedman added the second assist.

Just 35 seconds later, Johnson put the Lightning on top. Coleman took a shot from the point that Johnson tipped past Greiss. Cernak also picked up an assist on Johnson’s fifth goal of the season.

Nemeth tied it with a blast from the point past a screened Vasilevskiy at the 6:58 mark. Sam Gagner and Vladislav Namestnikov had the assists.

Larkin gave Detroit a 3-2 lead when he wristed a shot from the right circle past the Lightning goalkeeper on the far side at the 9:04 mark. Robby Fabbri and Hronek were credited with assists.

Cernak knotted the game at 9:40 of the third period, ripping a shot from the right circle through Greiss’ five-hole. Pat Maroon set up the play with a pass from behind the net.