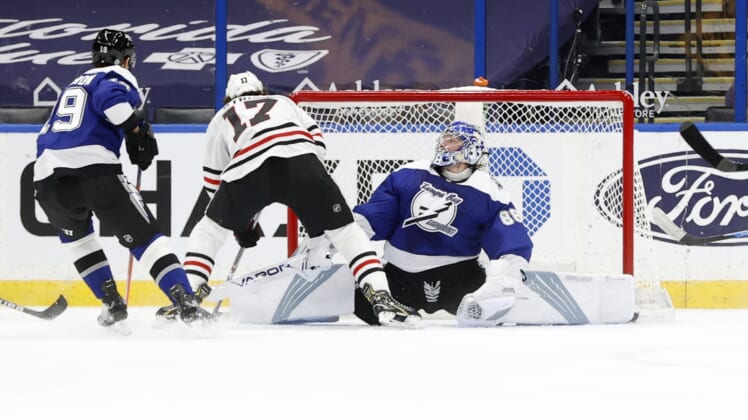 Rookie Ross Colton’s tiebreaking goal at 5:32 of the third lifted goalie Andrei Vasilevskiy to his career-high-tying 10th straight win and the Tampa Bay Lightning to a 4-2 victory over the visiting Chicago Blackhawks on Thursday.

In earning his NHL-best 19th win, Vasilevskiy made 19 saves to post 10 straight wins for the third time in his career. The active streak is the league’s longest — one better than Minnesota’s Kaapo Kahkonen.

Victor Hedman registered a goal and an assist, Alex Killorn scored for the fifth time this season against Chicago, and Yanni Gourde tallied for the Lightning, who are 11-2-1 in their last 14.

Mattias Janmark produced a goal and an assist, and Dylan Strome provided a tally for Chicago, which fell to 3-6-1 in its last 10. The Blackhawks connected on 2 of 4 chances with the man advantage.

A wild first period in the teams’ sixth meeting resulted in four goals — three on the power play.

Like they have done for the last four games, the Blackhawks scored first after Tampa Bay’s Barclay Goodrow was sent off for unsportsmanlike conduct just 47 seconds into the contest.

Following strong pressure around Vasilevskiy, Janmark scored from the doorstep when he tapped in a pass from Dominik Kubalik from above the high slot for his 10th goal at 2:10.

However, the Lightning knotted the match at 1 at even strength after Killorn skated around behind the Chicago goal and swept in a shot, which angled up off Lankinen’s goal stick and into the net at 13:15.

The clubs traded man-advantage markers late in the frame. Gourde scored at 17:02 for his ninth goal, but with the puck in tight on Vasilevskiy, Strome answered with multiple whacks and finally made it 2-2 on his fifth tally at 18:45.

A scoreless second period saw Vasilevskiy use a great kick-save at the back post at 15:28, denying Brandon Hagel’s tip-in after a steal by Pius Suter created the scoring chance.

Mathieu Joseph’s slick pass from the neutral zone’s side boards was perfectly placed to Colton, who sailed away from the Chicago defenders and shoved in his second career goal at 5:32 for the 3-2 lead.