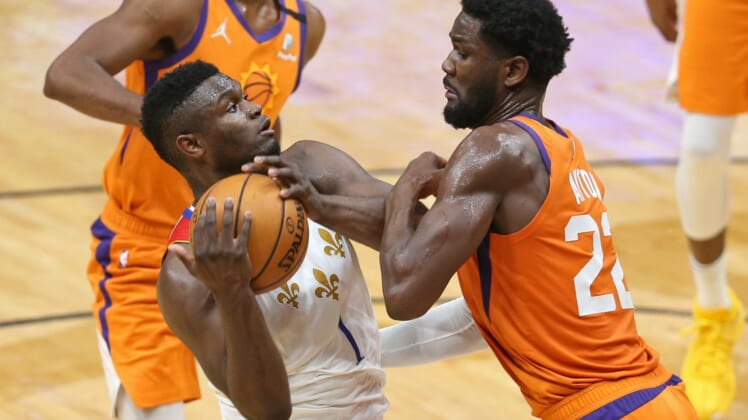 Devin Booker scored 23 points and Chris Paul and Deandre Ayton each had a double-double as the visiting Phoenix Suns defeated the New Orleans Pelicans 132-114 on Friday night.

The Suns trailed by 11 points at the end of the third quarter, but outscored the Pelicans 41-12 in the fourth quarter to win for the seventh time in eight games.

Paul had 15 points and 19 assists, Ayton had 16 points and 16 rebounds, Jae Crowder scored 20, Frank Kaminsky had 17 and Cameron Johnson scored 13.

New Orleans led by eight early in the third quarter before four Phoenix players scored to cut the margin to 75-73.

Ingram scored eight points as the Pelicans rebuilt the lead to 89-81. The Suns made just one field goal in the final 3:19 as New Orleans took a 102-91 lead at the end of the third quarter.

Crowder made three 3-pointers to lead a 17-2 run that gave Phoenix a 108-104 lead with seven minutes remaining.

JJ Redick made a 3-pointer for the Pelicans, but Johnson and Paul answered with a pair of 3-pointers that puts the Suns in command with a 118-107 lead with 4:41 left.

The Pelicans led by as many as seven points before settling for a 34-33 lead at the end of the first quarter after Phoenix scored the final six points.

The Suns carried the momentum into the second quarter as Mikal Bridges started the scoring with a consecutive baskets and Crowder added a 3-pointer to help them build a 42-36 lead.

Williamson made consecutive baskets that started a 14-0 run that gave New Orleans a 54-47 lead.

Phoenix answered with seven straight to tie the score, but Ball broke the tie by making a 3-pointer.

Ingram made a pair of dunks and added a 3-pointer as the Pelicans took a 66-59 halftime lead.