RECAP: Suns bounce back from loss, take down Grizzlies 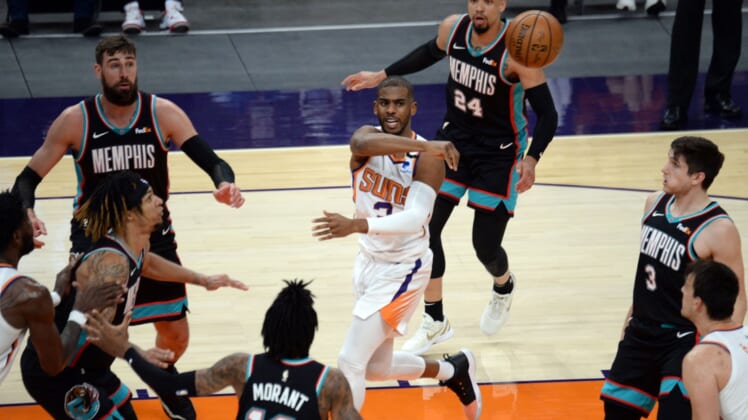 Devin Booker recorded 27 points and five assists to help the Phoenix Suns roll to a 122-99 victory over the visiting Memphis Grizzlies on Monday night.

Chris Paul scored 18 points on 9-of-11 shooting and added seven assists and four steals as the Suns won for the 18th time in the past 22 games.

Jonas Valanciunas had 24 points and 17 rebounds for his 24th double-double of the season for the Grizzlies, who have lost three straight games and four of their past five. Valanciunas made 11 of 14 field-goal attempts, and eight of his boards were on the offensive end.

Ja Morant and Grayson Allen scored 15 points apiece and Dillon Brooks had 13 for Memphis, which shot 43.7 percent from the field and 5 of 23 from 3-point range.

Phoenix shot 56.6 percent from the field and was 12 of 30 from behind the arc while rebounding from Saturday’s 122-111 setback against the visiting Indiana Pacers.

Booker scored 11 points in the third quarter as Phoenix opened up a 19-point advantage.

Booker later knocked down a jumper to push the lead to 17 with 2:10 left. Crowder ended the team’s second consecutive 36-point stanza with a 3-pointer with 12 seconds to go to make it 96-77.

Phoenix boosted the lead to 28 with just over five minutes left in the contest while cruising to the finish.

Valanciunas recorded 11 points and nine rebounds in the opening quarter as the Grizzlies led 25-24. But Phoenix was 15-of-21 shooting during a 36-point second quarter en route to the eight-point halftime lead.