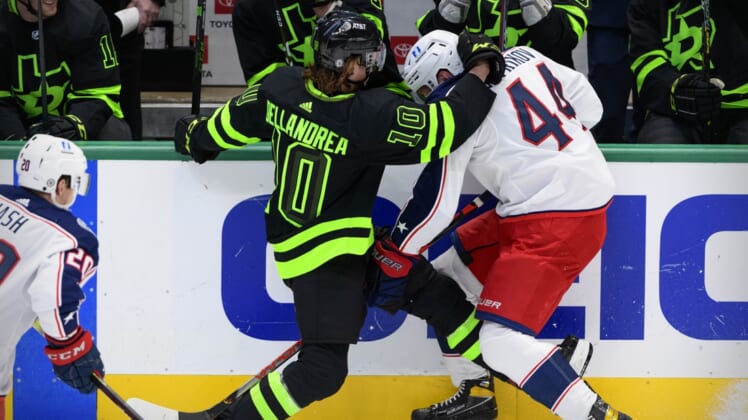 Jason Dickinson and Joe Pavelski scored just over three minutes into the game and rookie Jake Oettinger needed only 21 saves to record his first career shutout, as the Dallas Stars snapped a four-game skid with Saturday night’s 5-0 rout of the visiting Columbus Blue Jackets.

Roope Hintz had a goal with an assist while Miro Heiskanen and Radek Faksa also scored as Dallas won for just the second time in 12 games (2-7-3).

Oettinger, in his seventh career start and first since Feb. 25, was not severely tested, but solid enough to earn a memorable third career victory and help the Stars snap an 0-3-3 home rut.

Joonas Korpisalo stopped 18 of 22 shots before being pulled with 10:43 left in the game for the Blue Jackets, who were trying for a season-high third straight victory, but got blanked for the second time in six games. Columbus, which never recorded more than eight shots on goal in any period Saturday, lost for just the second time in its last 10 trips to Dallas.

After snapping a nine-period goal drought with two in the third during Thursday’s 3-2 loss to Columbus, the Stars were aggressive from the start. Dickinson fought his way through traffic to push the puck underneath Korpisalo just 2:24 into the game.

It was 45 seconds later that Pavelski converted a backhander from the slot for his team-leading 11th of the season, and just Dallas’ second power-play goal in seven games.

The Stars made it 3-0 with 6:14 left in the second period. Heiskanen, who scored his first of the season on Thursday, took the puck off the boards and blazed a wrister past Korpisalo on the blocker side. Hintz added the third-period insurance off some nifty stickwork to score and send Korpisalo to the bench.

Faksa added a short-handed goal with 41 seconds left on Columbus’ Veini Vehvilainen, who stopped three of four shots in a relief role of his NHL debut. Dallas last scored more than three goals on Feb. 2, a 6-3 win at Columbus.