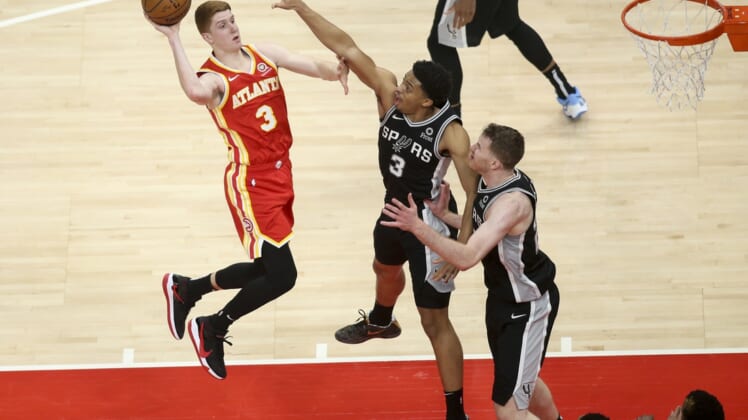 DeMar DeRozan scored 22 of his 23 points in the first half and the visiting San Antonio Spurs had seven players score in double figures in coasting to a 125-114 win over the Atlanta Hawks on Friday.

The Spurs never trailed, led by as many as 42 and played mostly reserves in the fourth quarter en route to their third win in their last four games.

DeRozan was 7-for-11 from the field and added eight assists and six rebounds. The Spurs got 20 from Keldon Johnson, 16 points and six rebounds from Dejounte Murray, 14 points, 12 rebounds and four blocks from Jakob Poeltl, 12 points from Patty Mills and 11 points each from Derrick White and Lonnie Walker IV.

Atlanta was led by Trae Young with 25 points and Clint Capela with 14 points and 11 rebounds. Rookie Skylar Mays came off the bench to make four 3-pointers, including his first career field goal, and he scored a career-high 20 points. Brandon Goodwin scored 13.

Atlanta has lost two straight and five of its last six.

The Spurs entered the game averaging only 110.2 points, 22nd in the league, but produced plenty of offensive fireworks in the first half. San Antonio shot 62.2 percent from the field, 64.3 percent on 3-pointers and produced a season-high 77 first-half points.

The Spurs led 77-48 at halftime to set a season high, topping their previous best for a first half of 66 against Memphis on Dec. 23. It was the most first-half points allowed by Atlanta, who gave up 67 to Brooklyn on Dec. 30.

Atlanta plays the second half of a back-to-back on Saturday when it hosts Indiana. The Spurs play the second game of their seven-game road trip on Sunday at Charlotte.