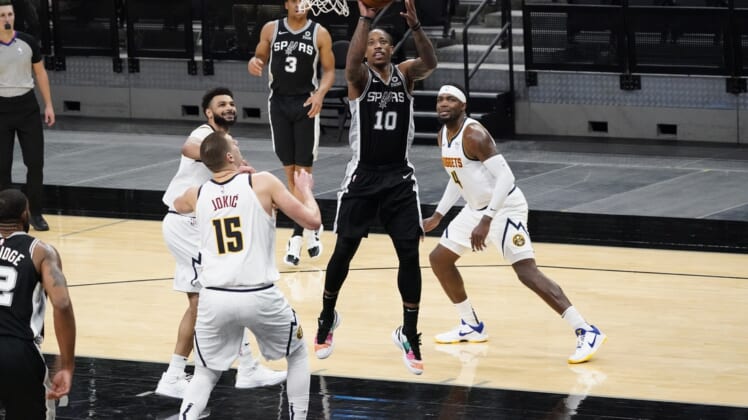 DeMar DeRozan scored 30 points and distributed 10 assists and San Antonio made all the key plays in the final six minutes as the Spurs defeated the visiting Denver Nuggets 119-109 on Friday to win their third straight game.

San Antonio led by just one point after three quarters but outworked the Nuggets in the fourth, using an 8-3 run midway through the period to build an 11-point advantage and then turned on the defensive pressure down the stretch to seal the victory.

Dejounte Murray added 26 points for the Spurs, with Keldon Johnson hitting for 19 and Patty Mills 17 for San Antonio.

Nikola Jokic racked up 35 points and 10 rebounds for the Nuggets, who had their five-game winning streak snapped. It was the 19th consecutive double-double for Jokic.

Jamal Murray scored 20 points while Gary Harris and Monte Morris added 11 and 10 points, respectively, for Denver. The Nuggets were without PJ Dozier, who has an injured hamstring.

San Antonio led by as many as 10 points in a rollicking, up-and-down first half that ended with the Spurs up 61-55. San Antonio outshot the Nuggets 59 percent to 51 percent over the first two quarters, including a 7 of 13 showing from beyond the arc.

The Spurs earned their halftime lead by outscoring Denver 14-2 at the free throw line; San Antonio was whistled for just six total fouls in the half.

DeRozan paced the Spurs with 14 points over the first 24 minutes while Dejounte Murray added 12 for San Antonio.

Jamal Murray and Jokic led the Nuggets with 12 each in the half.

The Spurs ruled the first seven minutes of the third quarter before Denver used a 16-6 run to tie the game at 77 with 4:14 remaining in the period. The Nuggets briefly took an 83-81 lead but San Antonio responded by scoring six of the final 10 points in the quarter, capped by back-to-back jumpers by DeRozan, to assume an 87-86 advantage heading to the final 12 minutes.