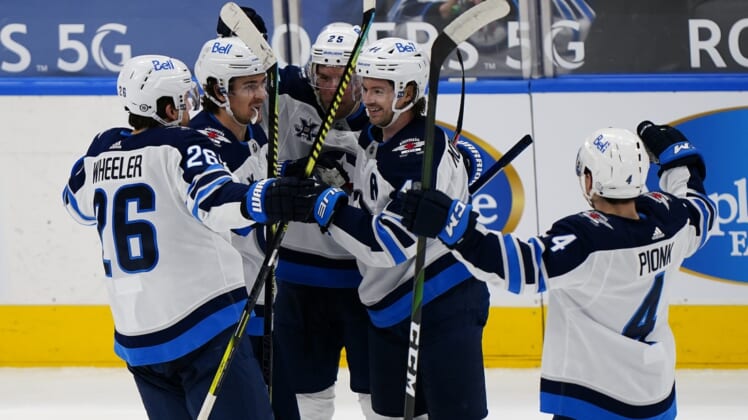 Andrew Copp had a goal and an assist while goaltender Connor Hellebuyck sparkled with a 36-save performance as the visiting Winnipeg Jets claimed a 4-3 victory over the Toronto Maple Leafs on Tuesday night.

Nikolaj Ehlers and Neal Pionk both collected a pair of assists for the Jets, who have won seven of nine games and vaulted into second place, behind Toronto, in the North Division.

Trailing 2-1 after the midway point, the Jets took flight starting with Josh Morrissey’s first goal of the season at 12:45 of the second period. Morrissey sent a long wrist shot that deflected off a defender past his own goalie to make it a 2-2 game.

Kyle Connor followed with the go-ahead goal late in the second period. From behind the net, Ehlers threaded a pass to Connor in the slot and he converted for his 12th tally of the season.

Mason Appleton netted the game winner at 7:53 of the third period with another hard-working goal. Appleton gained the puck in the high slot during a rush, drove to the net and while falling, deposited his seventh goal of the year to make it 4-2.

Auston Matthews scored this second of the game — and league-leading 20th of the season — with 1:54 remaining in regulation, but the hosts couldn’t get the equalizer.

With his goal, Matthews joins Dave Keon as the only players in franchise history to score 20 or more goals in each of their first five career NHL seasons.

Frederik Andersen stopped 19 shots for the Maple Leafs, who have lost three straight games for the first time this season.

The Maple Leafs found the quick start they were looking for when Zach Hyman opened the scoring with a great individual effort. Hyman gained the puck inside his own blue line, worked his way past a few defenders all the way to the net before lifting a backhand home for his eighth goal of the season at the 8:16 mark.

Before the first intermission, the clubs traded power-play goals. Copp evened the scoring when he redirected Pionk’s point shot at the 12:20 mark, but Matthews restored Toronto’s edge when he set up shop at the front of the net and deflected Morgan Rielly’s shot from the point at 17:44 for his first goal in six games.

The win came at a price for Winnipeg as defenseman Nathan Beaulieu left the game early in the second period after a shot he attempted to block hit him in the hand.