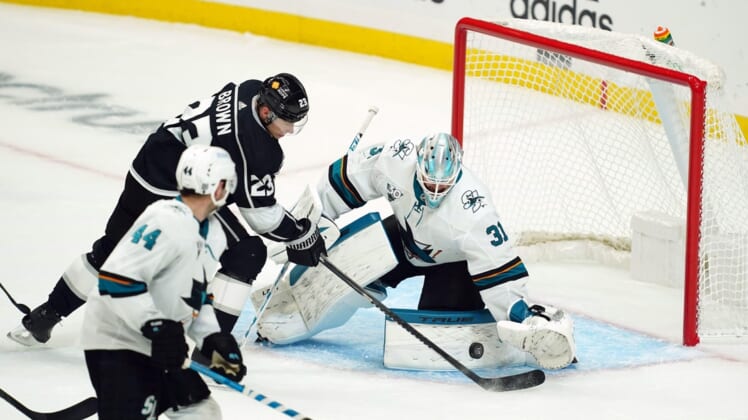 Evander Kane tied the score with 45 seconds left in regulation and the visiting San Jose Sharks beat the Los Angeles Kings 4-3 in a shootout on Tuesday night.

Timo Meier and Logan Couture also scored, and Martin Jones made 24 saves for the Sharks before denying all three Los Angeles attempts in the shootout. Couture, who added an assist, was the only player on either team to convert his shootout opportunity.

Dustin Brown had two goals and an assist, Anze Kopitar also scored, and Calvin Petersen made eight of his 37 saves in overtime for the Kings, who lost their fifth straight (0-4-1).

Kane tied the score 3-3 when he swept in the puck during a scramble in front of the net with Jones pulled for an extra attacker.

The Kings had scored three straight goals after allowing the first two.

Alex Iafallo took the puck behind the San Jose net and fed Brown on the other side for the one-timer and a 3-2 lead at 10:45 of the third period.

San Jose led 2-0 after the first period, but the Kings scored twice in the second.

For the third straight game, the Sharks scored first when Meier made it 1-0 at 1:20 of the first period.

Ryan Donato backhanded a centering pass from just above the goal line to Meier cutting through the slot. Meier faked out Petersen before backhanding the puck into the net on the near side.

Meier led the Sharks with 49 points (22 goals, 27 assists) in 70 games last season, but had been held to no goals and two assists in the previous eight games before Tuesday.

Patrick Marleau, appearing in his 1,734rd NHL game to move into sole possession of third on the all-time NHL list, backhanded a pass to Couture, who scored at 17:48 to make it 2-0.

It was the 628th assist of Marleau’s career, passing Mike Gartner for 80th on the all-time assist list.

Nikolai Knyzhov was also credited with an assist on Couture’s goal for his first NHL point.

San Jose outshot the Kings 12-4 in the first period.