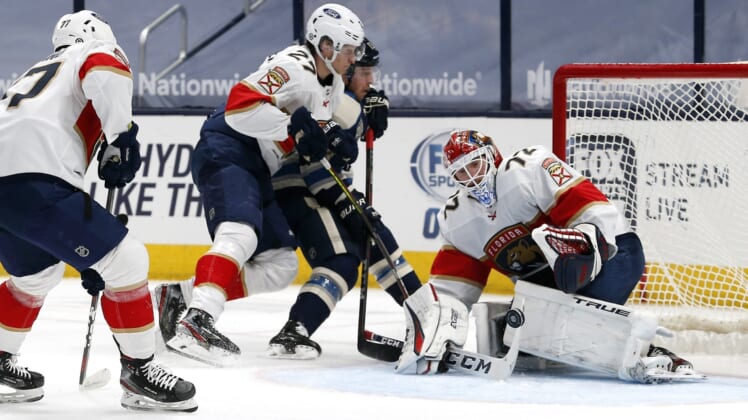 Sergei Bobrovsky made a season-high 38 saves to win his third straight start, as the visiting Florida Panthers beat the Columbus Blue Jackets 4-2 on Tuesday night.

Juho Lammikko, Patric Hornqvist, Owen Tippett and Carter Verhaeghe each scored for the Panthers, who are 4-1-2 over the last seven games. Bobrovsky, the former Blue Jacket, was solid in net, and also benefited from Columbus hitting iron on three occasions.

Columbus trailed 3-1 in the third period, but got within a goal when Oliver Bjorkstrand scored off a redirection of Zach Werenski’s shot with 8:22 left in regulation. The Blue Jackets had a late power play, and with their goaltender pulled at the same time, pressured, but Bobrovsky helped his club kill the penalty with a pair of key saves.

Verhaeghe iced the game with an empty-net goal.

Joonas Korpisalo stopped 29 shots for Columbus, which has lost four of its last five at home.

It did not take long for the Panthers to open the scoring. A little less than five minutes into the contest, Lammikko skated in the Blue Jackets’ zone untouched and slid a backhander underneath the right pad of Korpisalo.

Yet, it was Bobrovsky who was the star of the opening period. He stopped all 16 shots his former team threw at him, highlighted by a save on Cam Atkinson’s short-handed, breakaway attempt.

Florida padded its advantage to 2-0 just 2:45 into the middle period. Aaron Ekblad’s power-play blast glanced off Hornqvist in front of the net and past Korpisalo. Columbus, though, finally got one by Bobrovsky three minutes later through Michael Del Zotto, who converted off a stellar backhanded pass in the slot from Eric Robinson, to make it 2-1.

Another power-play goal by the Panthers, made it 3-1 with 1:48 left in the second. This time, Tippett recorded his third career goal with a shot from the point that a screened Korpisalo appeared not to see.

These teams will play again Thursday at Columbus.