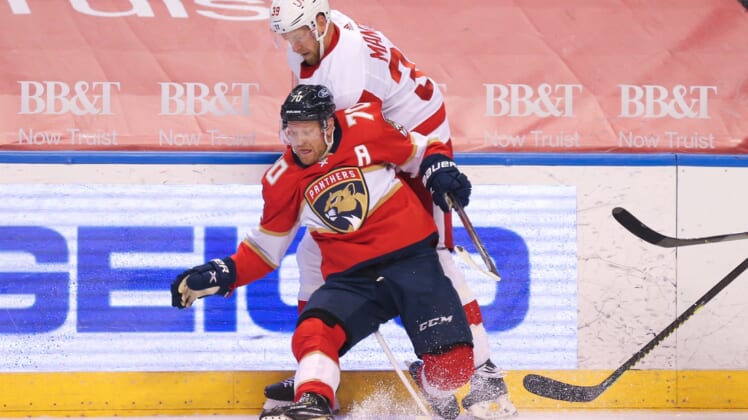 Jonathan Huberdeau dished out two assists and Sergei Bobrovsky made 31 saves, leading the Florida Panthers past the Detroit Red Wings 2-1 on Tuesday night at Sunrise, Fla.

Huberdeau leads the Panthers with 14 points, and Florida, with the win, continues one of the best starts in franchise history at 7-1-2.

The Panthers got goals from Alex Wennberg and Patric Honrqvist. Florida’s line of wingers Hornqvist and Huberdeau and center Wennberg dominated the game with five points, including a Hornqvist assist.

Bobrovsky (4-0-1) has yet to lose in regulation this season. His biggest sequence of the game came in the final minute of the second period, when he stopped three straight great chances by Darren Helm.

The Red Wings got a goal from Filip Zadina and 20 saves from Thomas Greiss. But Detroit failed to capitalize on any momentum established in Sunday’s 4-1 win over Florida.

Early on Tuesday, the Wings were skating well. Detroit opened the scoring with 3:31 gone in the first period. Zadina took a pass from Dylan Larkin, used his right skate to kick the puck to his stick and then beat Bobrovsky on a bad-angle shot from the bottom of the left circle for his first goal of the season.

Florida tied the score with 15:54 expired in the first. Huberdeau’s backhand shovel pass connected in the slot with Wennberg, who scored five-hole on a one-timer. Huberdeau slipped his pass in between two defenders.

A tripping penalty by Detroit’s Robby Fabbri helped the Panthers take a 2-1 lead on a power-play goal with 11:56 left in the second. On the play, Aaron Ekblad’s drive from the back of the right circle bounced in off Hornqvist’s chest.

It was Hornqvist’s sixth goal of the season, including his team-high fourth with a man advantage.

Detroit outshot Florida 13-3 in the third period but could not come up with an equalizer.