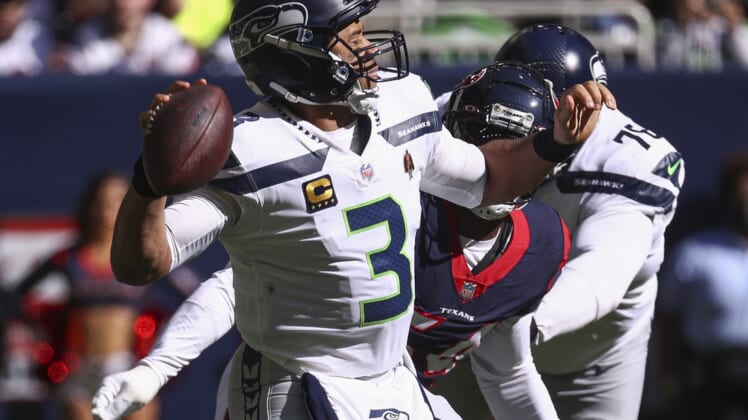 The Seahawks (5-8) rode a big-play offense plus a strong second-half defensive performance to victory. In addition to Wilson and Lockett thriving in the aerial attack, Rashaad Penny produced touchdown runs of 32 and 47 yards en route to a 137-yard performance.

Seattle held the Texans (2-11) scoreless following halftime. Houston pulled to within 16-13 on the final play of the second quarter when Ka’imi Fairbairn converted a career-long and franchise-best 61-yard field goal that capped a frenetic final minute of the half.

The Seahawks pulled ahead for good just 52 seconds earlier when Wilson connected with Lockett for a 55-yard scoring strike on the first play of that drive. Seattle earned that field position by forcing the Texans to punt from inside their 10-yard line following a three-and-out.

Wilson completed passes of 24 yards to Lockett and 25 to Will Dissly on a seven-play, 97-yard march that culminated in Penny’s first touchdown and provided the Seahawks a 10-7 lead on the final snap of the first quarter.

En route to securing a 27-13 lead with 7:34 left to play, Wilson found Lockett for a 29-yard gain on third down that set the table for his 1-yard scoring pass to Gerald Everett. Lockett snagged the two-point conversion for a two-touchdown lead.

Lockett had five receptions for 142 yards to up his total to 1,023 yards. He joined Hall of Famer Steve Largent as the only receivers in team history with three consecutive 1,000-yard seasons.

Texans rookie quarterback Davis Mills led a spirited first-half showing. Houston covered 75 yards in seven plays, with Mills going 5-for-5 with 72 yards, in taking a 7-0 lead after Mills hit Brevin Jordan on a 5-yard scoring pass. It marked the first points for the Texans in 19 drives and their first touchdown on an opening drive since Week 5 against the New England Patriots.