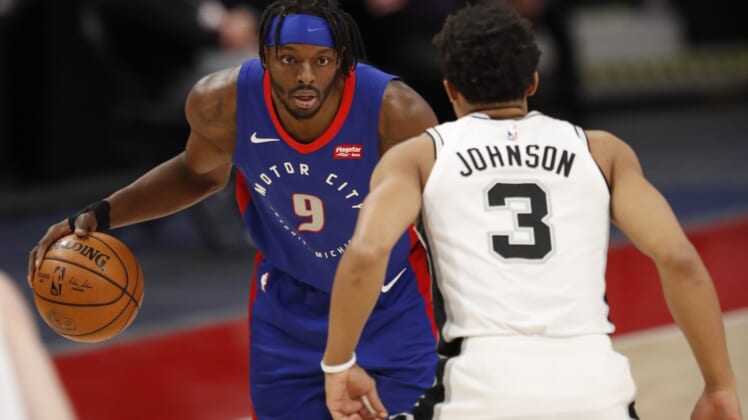 Dejounte Murray had 19 points, 10 rebounds and six assists as the San Antonio Spurs bounced back from a lopsided loss the previous night by rolling past the host Detroit Pistons 109-99 on Monday.

San Antonio, which was blown out 134-99 by Philadelphia on Sunday, grabbed the lead in the second quarter and held it the rest of the way. Jakob Poeltl supplied 14 points, 12 rebounds, four blocks and two assists, while Patty Mills tossed in 14 points off the bench.

The Spurs’ leading scorer, DeMar DeRozan, missed his third consecutive game due to a death in his family.

San Antonio shot 56.6 percent overall and 48 percent from 3-point range. The Pistons made 47 percent of their shot attempts but were limited to 28 percent shooting from distance. The Spurs also won the rebounding battle, 45-34.

Josh Jackson’s 15 points led Detroit, which has lost four straight. Jerami Grant had 14 points and Rodney McGruder added 13 in his first start this season. Frank Jackson and Isaiah Stewart chipped in 10 points off the bench.

Derrick White scored on back-to-back possessions early in the second half to give the Spurs a 66-53 lead. Keldon Johnson’s three-point play pushed the advantage to 14 points.

Detroit cut its deficit to 10 points on two occasions. San Antonio then took control by finishing the third with a 19-9 run.

Vassell sparked the run with an assist and two dunks. Gay, Mills and Murray knocked down 3-pointers in the final 1:36 of the quarter to make it 95-75.

Vassell also opened the fourth quarter with a 3-point make and the Pistons never mounted a threat.

San Antonio shot 70 percent from the floor in the second quarter to gain a 60-50 halftime lead.

Murray and Walker combined for 23 first-half points while McGruder led the Pistons with 10 points.