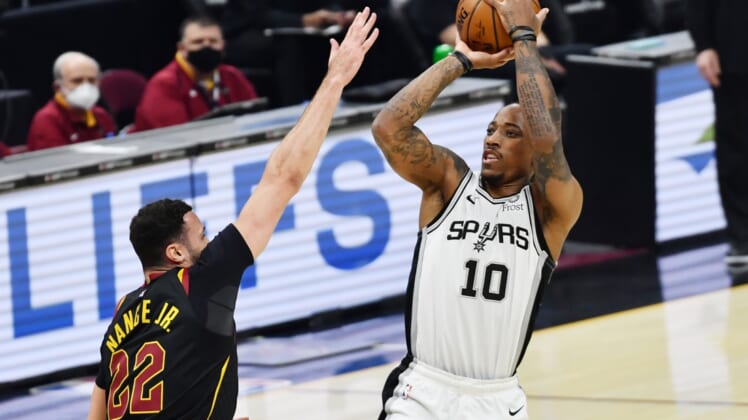 Keldon Johnson collected 23 points and a career-high 21 rebounds to lift the visiting San Antonio Spurs to a 116-110 victory over the Cleveland Cavaliers on Friday.

Johnson recorded 11 offensive boards to highlight his sixth double-double of the season for the Spurs, who led wire-to-wire en route to winning their third straight game.

San Antonio’s Dejounte Murray had 22 points and DeMar DeRozan added 20 in his return from a four-game absence following the passing of his father.

Derrick White chipped in 17 points to help the Spurs improve to 10-2 versus Eastern Conference teams this season.

Collin Sexton scored 16 of his 29 points in the second half and Darius Garland also had 29 points for the Cavaliers, who have lost five of their past six games. Lamar Stevens and Jarrett Allen each collected 15 points and 11 rebounds in a losing effort.

San Antonio secured a 54-42 lead at intermission after shooting 48.9 percent from the floor. The Spurs liberally exploited the interior, with Johnson scoring 12 of his 15 points in the paint.

San Antonio kept its foot on the gas in the third quarter, with DeRozan scoring six quick points in a 59-second sequence to stake his team to a 64-46 lead. The Spurs pushed their advantage to a game-high 22 points at 75-53 after Patty Mills drained 3-pointers on back-to-back possessions.

Stevens scored 10 of Cleveland’s next 12 points to trim its deficit to 84-74 with 8:41 remaining in the fourth quarter. Brodric Thomas’ 3-pointer got the Cavaliers within four with 8.9 seconds to play before the Spurs put the game away.

San Antonio bolted out of the blocks by scoring 12 of the game’s first 15 points before settling for a 25-22 lead after the opening quarter. Garland scored 10 points and Sexton added nine to keep Cleveland within striking distance.

Sexton made a layup to open the second quarter before San Antonio ignited a 15-1 run to seize a 40-25 lead. Johnson scored five points, DeRozan added four and Rudy Gay had a steal and emphatic slam to highlight the surge.