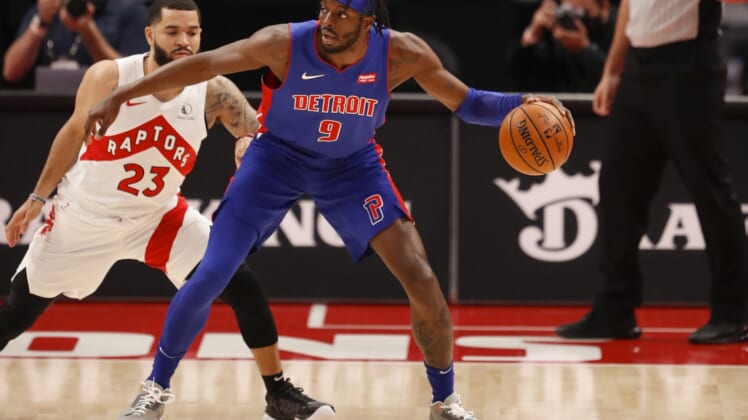 Saddiq Bey had 28 points and 12 rebounds and the host Detroit Pistons ended a four-game losing streak with a 116-112 victory over the reeling Toronto Raptors on Wednesday.

Norman Powell poured in a career-high 43 points for the Raptors, who lost their sixth consecutive game. Toronto’s Chris Boucher had 21 points, and Kyle Lowry amassed eight points and 15 assists.

Raptors starters Pascal Siakam and Fred VanVleet returned to action after missing six and five games, respectively, due to the league’s health and safety protocols. Siakam finished with 13 points and VanVleet added 12.

The Raptors scored nine consecutive points, including five by Powell, early in the second half to gain a 68-65 lead.

Detroit answered with a 14-3 run behind Wright, who scored two baskets and dished out two assists during that span. Jackson completed the run by tipping in his own miss.

The Pistons increased their lead to nine on two Wright free throws in the final minute of the quarter. Powell dunked on the next possession, making the score 88-81 heading into the fourth quarter.

Toronto cut its deficit to six on a Lowry shot with 7:06 to go, but Wright responded with two consecutive baskets.

With just under three minutes to go, Powell swished two free throws to cut Detroit’s lead to 105-100. A Boucher layup made it a three-point game, but Jackson answered with a 3-pointer.

Another Boucher layup with 41 seconds remaining pulled Toronto within 110-106.

With 32.2 seconds left, Powell made a 3-pointer to slice Detroit’s lead to 112-109. Grant’s step-back jumper with 7.7 seconds left gave the Pistons some breathing room. Powell answered with a 3-pointer, but Bey clinched Detroit’s victory with two free throws.