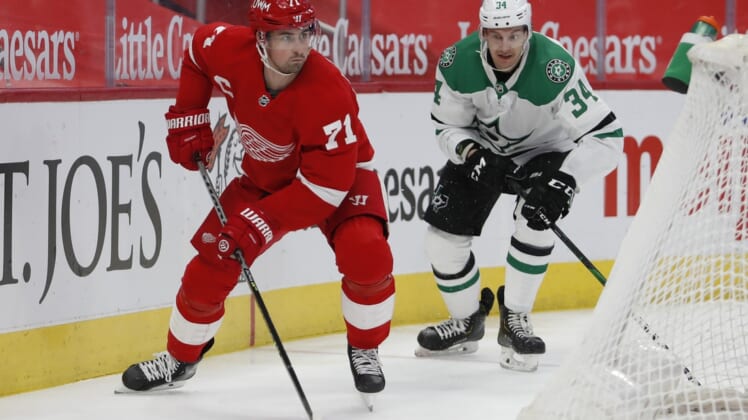 Fabbri scored in each period as Detroit built a 3-0 lead, then held off the Stars’ rally. Fabbri’s other hat trick came against Philadelphia on Dec. 28, 2016, as a member of the St. Louis Blues.

Jonathan Bernier, Detroit’s starting goaltender, was injured late in the second period after stopping all 22 shots he faced. He was replaced by Thomas Greiss, who made 16 saves.

Roope Hintz and Jason Dickinson scored the Stars’ goals. Dallas had a 40-21 advantage in shots on goal.
Dallas outshot Detroit 14-4 in the first period, but the Wings emerged with the lead.

Fabbri scored his first goal of the night with six minutes remaining in the first period.

The goal came during a 4-on-4, as Dallas’ Ty Dellandrea was in the penalty box for interference and Vladislav Namestnikov was sent off for embellishment.

Troy Stecher passed the puck out of his zone to Fabbri, who tipped it toward Anthony Mantha.

Mantha brought the puck past the blue line and drew two defenders, then dropped the puck to Fabbri, who fired a shot from the slot that beat Jake Oettinger on the stick side.

Fabbri’s second goal came at 6:36 of the second period. Marc Staal collected the puck in his own zone and made a cross-ice pass to Fabbri on the right side. Fabbri lifted a shot from the right circle over Oettinger’s left shoulder.

Bernier was injured with 1:28 remaining in the period when two players fell on him as he pursued the puck behind the net.

Fabbri benefited from a 2-on-1 situation to notch the hat trick. Dylan Larkin fanned on a shot but managed to tap the puck to Fabbri in front with 10:55 remaining.

With Dallas’ net empty, Dickinson scored on a tip-in of a Jason Robertson shot from the point with 1:20 remaining to make it a one-goal game. Radek Faksa had the second assist.