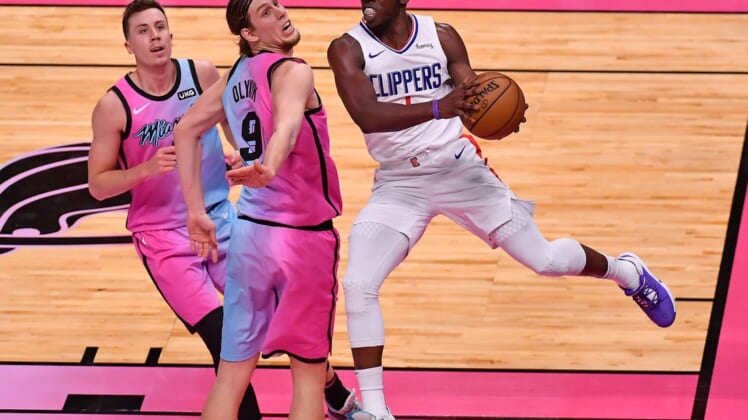 Miami lost its fifth straight game, the longest active skid in the NBA. Los Angeles won for the eighth time in the past nine games.

The Clippers also got 17 points from Lou Williams and 16 points each from Marcus Morris Sr. and Reggie Williams. Morris scored 10 of his points in the fourth quarter. Terance Mann had 12 points for Los Angeles, and Serge Ibaka added 10 points and 13 rebounds.

Tyler Herro, in his first game off the injured list, led Miami with 19 points. Herro, who missed seven straight games due to a neck injury, also added 10 rebounds and five assists.

Gabe Vincent added 18 points for the Heat, who also got 16 points, 13 rebounds and seven assists from Bam Adebayo. Max Strus scored 12 points while Precious Achiuwa and Kendrick Nunn each had 10.

Miami, which led by 18 points early, got outscored 69-36 in the middle two quarters.

The Clippers were without three starters, including two stars who sat due to COVID-19 protocols: Kawhi Leonard and Paul George. Point guard Patrick Beverley (knee) also missed the game.

Miami had only 10 available players. The Heat were missing star wing Jimmy Butler (COVID protocols) for the 10th straight game and Goran Dragic (groin) for the second straight game.

The Heat had a 33-19 lead after the first quarter, having shot 50 percent from the floor, including 8-for-13 from 3-point range. The Clippers shot just 26.1 percent, including 1-for-9 from beyond the arc.

Los Angeles used an 14-4 run to tie the score at 45 with 2:04 left in the second quarter, but Miami recovered and held a 50-48 lead at halftime. Vincent led all first-half scorers with 13 points.

The Clippers took their first lead of the game with 6:59 left in the third as they made three consecutive 3-pointers (two by Ibaka and one by Batum). Los Angeles kept coming and took an 88-69 lead after three quarters. Miami got outscored 40-19 in that third.

The Heat started the fourth on a 10-0 run, but the Clippers held on for the win as Miami missed three consecutive 3-point attempts on its final possession. The Heat made just 4 of 15 shots from beyond the arc after halftime.