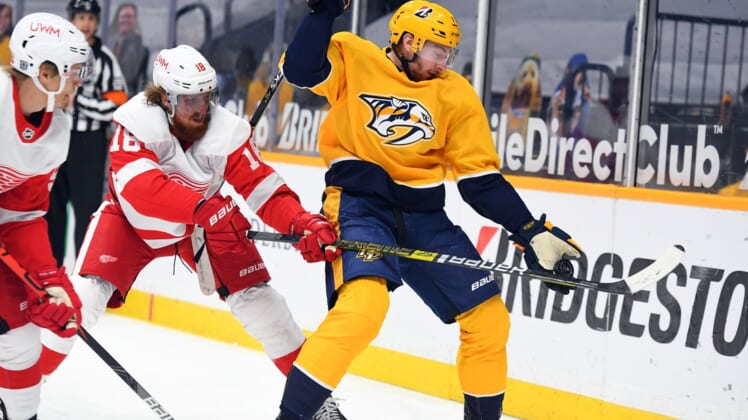 Luke Glendening had a goal and two assists to lead the Detroit Red Wings to a 4-2 victory over the host Nashville Predators on Saturday.

Robby Fabbri supplied a goal and an assist, and Adam Erne and Anthony Mantha also scored for the Red Wings.

Winning goaltender Jonathan Bernier made 21 saves. Bernier was playing his second game since Jan. 24 after recovering from an upper body injury.

Nashville scored a last-minute goal to beat Detroit 3-2 on Thursday but never held the lead in the rematch.

Filip Forsberg and Rocco Grimaldi scored the Predators’ goals. Juuse Saros replaced Pekka Rinne in goal at the start of the third period. They combined for 26 saves.

Fabbri put the Wings on the board five minutes into the contest. Valtteri Filppula circled around the Predators net and found Fabbri open in front. He easily beat Rinne for his fourth goal this season. Filip Hronek picked up the second assist.

Erne scored his first goal this season at 12:24 of the period. He took a pass from Glendening and skated in through the middle. Erne then cut to his right and flicked a backhander, which bounced off Rinne’s uniform and into the net.

Bernier made a spectacular glove save against Matt Duchene in the closing seconds of the period to preserve Detroit’s 2-0 advantage.

Glendening, like Erne a member of Detroit’s fourth line, scored at 17:22 of the second period. He collected the puck near the blue line and shoveled a backhander through Rinne’s five-hole to make it 3-0. Fabbri and Troy Stecher were credited with the assists.

It was Glendening’s first goal in 42 games, dating back to last season.

Forsberg caught a break to allow the Predators to end Detroit’s shutout bid at 7:57 of the third period. He slid the puck across the Wings’ goal crease. The puck deflected off defenseman Marc Staal and past Bernier. Duchene and Dante Fabbro were credited with assists.