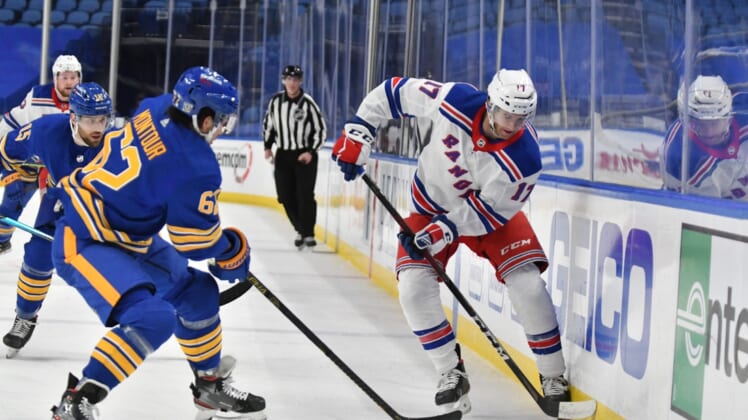 Off a two-on-one-situation, Lafreniere, the No. 1 overall pick in the 2020 NHL Draft, took a saucer pass from Colin Blackwell and beat Buffalo netminder Linus Ullmark (36 saves) 2:47 into the extra session. Lefreniere had to wait seven games to find the scoresheet for the first time, but it resulted in the Rangers’ second win of the season.

Artemi Panarin added a goal and assist for the Rangers in the victory.

The Sabres’ Sam Reinhart made it 2-2 at 4:47 into the third period on a redirection of a Victor Olofsson pass for Buffalo’s sixth power-play goal in three games. It would stay tied through the rest of the period as Buffalo played past regulation for the third time in four games.

Despite the loss, the Sabres have earned at least one point in four consecutive games (2-0-2).

Eager to start strong, New York was the aggressor early on while outshooting Buffalo 5-1 through the first five minutes of the game. As was the case in their 3-2 loss at Buffalo on Tuesday, the Rangers struck first. This time it was Ryan Strome, who flipped in a cross-slot pass from Panarin with 10:16 left in the opening period.

Despite being outshot 15-5 in the first, Buffalo tied the game at 1-1 with 22 seconds left before the first intermission. Reinhart threw the puck close enough to the Rangers’ net that Jack Eichel was able to tap it by New York goaltender Igor Shesterkin (23 saves) for his second goal in two games.

It looked as if the second period would come and go without a goal. Then Panarin pounced on a loose puck near the front of the net and converted to snap a four-game goal drought to give New York the lead back with 3:50 left in the middle frame.