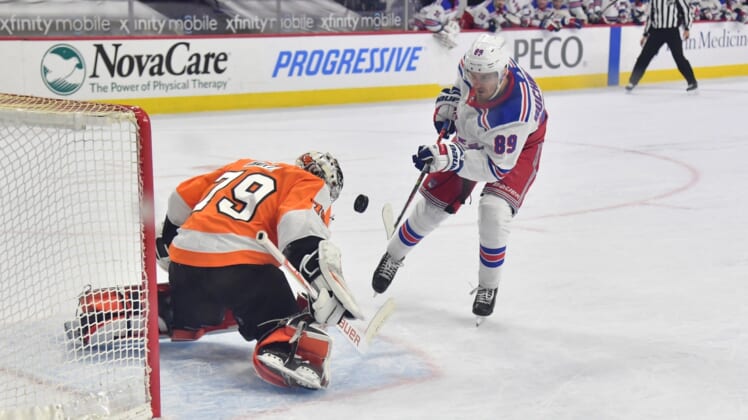 Kaapo Kakko and Artemi Panarin each scored in the Shootout to lift the visiting New York Rangers to a 3-2 victory over the Philadelphia Flyers on Thursday.

Colin Blackwell and Brendan Smith scored one goal apiece during regulation as the Rangers snapped a four-game losing streak.

Nicolas Aube-Kubel and Joel Farabee each scored one goal for the Flyers.

Kevin Hayes had two assists and goaltender Carter Hart stopped 31 shots. Sean Couturier was the lone player out of three to score in the Shootout.

The Flyers jumped out to a 1-0 lead at 59 seconds of the first period when Aube-Kubel tapped a loose puck into the net.

The Rangers generated little offensive pressure throughout the first before earning their first power play, a two-man advantage, with 2:08 left. But 35 seconds in, New York’s Chris Kreider was whistled for a penalty. The Rangers weren’t able to capitalize and trailed by a goal at the end of the first.

New York tied the game at 1 when Blackwell deflected a puck in front on the power play at 3:24 of the second.

The Rangers picked up a penalty shot when Ivan Provorov took down Pavel Buchnevich at 16:41 of the second. But Hart made the stick save against Buchnevich.

The opening few minutes of the third were quite physical with both teams delivering some hard checks.

New York soon regained the offensive momentum and went ahead 2-1 when Smith scored at 8:21 of the third. It was Smith’s first goal since December of 2019.

Provorov nearly tied the game with 9:40 to go but his wrist shot sailed just over the goal.

Hart was pulled for an extra skater with 2:31 remaining and Farabee scored the equalizer with 1:14 left.

The Flyers killed off a late power play and neither team scored in overtime.